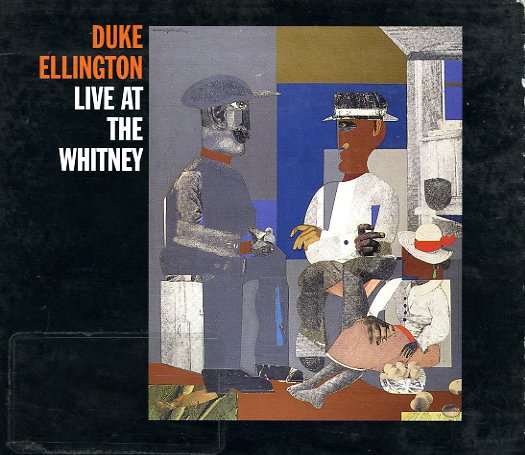 Live At The Whitney

Crucial late work from Duke – as modern as The Whitney itself! The material was recorded live in performance at the Whitney Museum of American Art in 1972 – with Duke on piano, Joe Benjamin on bass, and Rufus Jones on drums – and it's got that angular, spare, fragile approach of some of Duke's rare later classics, especially the Money Jungle album. Tracks are a mixture of older themes from Ellington's career – done sparely and shortly – and titles include "Lotus Blossom", "Mood Indigo", "Kixx", "Dancers In Love", "Amour Amour", "Soda Fountain Rag", and "Meditation".  © 1996-2023, Dusty Groove, Inc.
(Large peeled spot on front cover. Mark through barcode.)

Duke's Big 4
Pablo, 1973. Used
CD...$9.99 12.99
Duke's Big 4 here are a quartet of jazz legends – Joe Pass, Ray Brown, and Louie Bellson – all working with Duke himself to serve up unique small combo versions of older Ellington full band classics! The mix of piano, guitar, bass, and drums is a bit unusual for Ellington – and ... CD

Duke Ellington Meets Coleman Hawkins
Impulse, 1962. Used
CD...$6.99 (LP...$36.99)
A legendary meeting of two classic jazz talents late in their careers – in a setting that's ideal to bring out all the complexity of their well-honed genius! The approach of the album is mostly an Ellington one – as the group features some of Duke's stalwarts, like Ray Nance on trumpet ... CD

Such Sweet Thunder (plus bonus tracks)
Columbia, 1957. Used
CD...$4.99
Excellent Duke Ellington work from the late 50s – written and recorded during a period in which he was reemerging with a stronger jazz vision than ever before! The set was written by Ellington and Strayhorn – and dedicated to the Shakespeare Festival in Stratford, Ontario – but ... CD