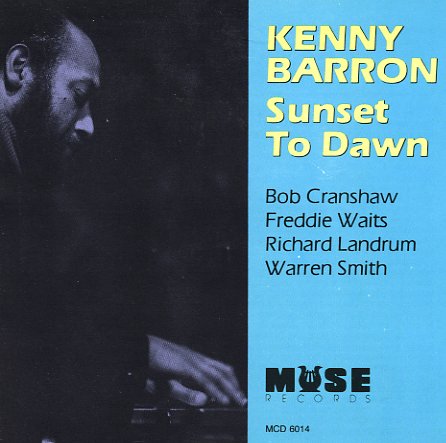 Sublime 70s work from Kenny Barron – a record that really has him stretching out strongly from his roots in the 60s, and sounding almost even more inventive than on some of his later material as well! Kenny's playing a fair bit of keyboards on the set – showing a wonderful sensitivity for electric modes, in ways that are quite different than some of his contemporaries – very cool, and often spacey, but in really unique sort of ways! Acoustic piano figures into the mix as well – and is layered beautifully along contributions from group members who include Bob Cranshaw on bass, Freddy Waits on drums, Warren Smith on vibes, and Richard Landrum on percussion – a hornless but very full sounding group. The set includes the great groover "Swamp Demon" and the very well-sampled "Sunset", plus "Al-Kifha", "Delores St SF", and "Dawn".  © 1996-2022, Dusty Groove, Inc.
(Out of print.)

I'm Beginning To See The Light
Muse, 1991. Used
CD...$6.99
Beautiful tenor work from Buck Hill – an under-acknowledged genius who finally got his chance to reach a larger audience with a handful of Muse Records releases like this one! Hill's a player with a great deal of feeling – a tone that stretches back to Coleman Hawkins in his best later ... CD

Night Out
Muse, 1990. Used
CD...$11.99
A great little groover from bassist Michael Logan – a player originally from Chicago, and one with a really classic sort of feel! Logan brings a warm, round sort of feel to the record – one that has the bassman guiding things beautifully from the bottom – ensuring that the ... CD

Out Of The Tradition
Muse, 1990. Used
CD...$8.99
Jack Walrath is a surprisingly compelling trumpeter who always grabs us in different ways – soulful one minute, experimental the next – always with an approach that's quite unique! On this special little set, he begins by just blowing a mouthpiece – using a tone that's really ... CD

Interchange
Muse, 1994. Used
CD...$5.99
Later work from Pat Martino, but a set that shows that the guitarist has lost none of his fire over the years! The set's done with a relatively freewheeling sound – not free, but open, as Martino spirals out wonderfully with some very creative solo lines – often quite extended, and ... CD

Bar Wars
Muse/32 Jazz, 1977. Used
CD...$8.99
The title's a bit hokey – an obvious play on the Star Wars film that was running in theaters at the time of the record – but the sound is classic Willis Jackson at his finest, recorded in a style that's right up there with his best 60s work for Prestige! The group here is a quintet ... CD

Lion & His Pride
Muse, 1991. Used
CD...$9.99
Houston Person really sounds great in this later date for Muse Records – definitely the older lion in the title, surrounded by a younger pride of players who really make the record swing! The set's got a rock-solid rhythm section with Benny Green on piano, Christian McBride on bass, and ... CD

Solid
Muse/32 Jazz, 1986. Used
CD...$9.99
One of Woody's last albums – a back to basics set, recorded with a group that include Kenny Garrett on alto sax, Kenny Barron on piano, and guest guitar work on one track by Peter Leitch. The approach is straight modal hardbop – in the spirit of Woody's first recordings for Muse – ... CD