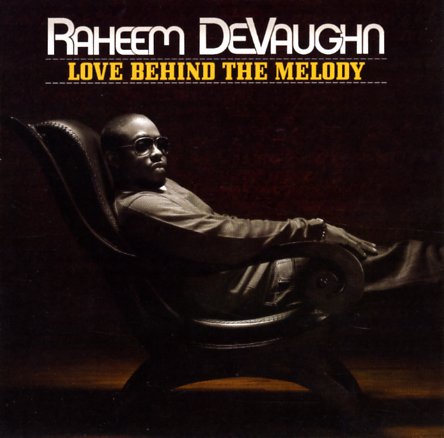 Love Behind The Melody

Damn great work from Raheem DeVaughn – the full promise of his soulful sojourn in the underground mixtape scene! Raheem first got his start laying down vocals over beats and other folks' tracks on self-crafted CDs that changed hands covertly in the east coast scene – and that experience gave him plenty of time to grow and mature, quietly developing his sound to a point where he can really burst forth with power on a record like this! There's still a bit of the old mixtape feel going on here – a range of older musical influences that inform Raheem's tunes – and a personal, almost casual approach that has DeVaughn speaking intros to some tracks, almost as if he's spinning them out with a personal, conversational style. Yet the production is also much better than before too – quite warm, with some great beats and keys in the mix – proof that stepping out of the underground can often be a good thing for a soul artist. Titles include "Customer", "Hello Love", "Woman", "Love Drug", "Friday", "Can We Try Again", "Empty", "Four Letter Word", and "Woman I Desire". Includes guest appearances from Floetry, Big Boi, and Malik Yusef.  © 1996-2021, Dusty Groove, Inc.

Heroes Of Nature
Jive, 2001. Used
CD...$2.99
A really beautiful album from Smoke City – one of their most Brazilian-tinged efforts yet, and a sunny blend of London soul with the warmth of the Rio scene. The group, if anything, have only gotten gentler over the years – and this album's a sweet mix of light vocals, acoustic guitar, ... CD