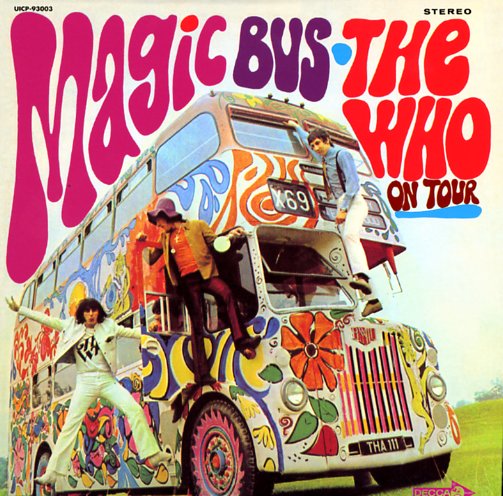 The Who may look like they're tripping things out a bit with the cover and title to this one – clearly a nod to the Magical Mystery Tour-era Beatles – but the groove here is tight, right, and pretty darn mod all the way through – very much in the spirit of the group's earlier albums on Decca! The tracks are all short, and still feature strong influences from soul and R&B – but they also show a great talent for sneaking in spookier bits or more complicated parts too – odd musical elements that might have their roots in older R&B, but which here are turned towards a more mature expression of the group's earlier idiom – really pointing the way towards some of their more ambitious projects in coming years! Titles include "Magic Bus", "Doctor Doctor", "Someone's Coming", "Our Love Was Is", "Call Me Lightning", "Pictures Of Lily", "Bucket T", "Run Run Run", and "Disguises".  © 1996-2022, Dusty Groove, Inc.
(Black label stereo pressing. Cover has light wear and aging, cut corner. Vinyl has a small mark that clicks for a few spins during "Disguises" but plays fine otherwise.)

Who Sell Out
Decca, Late 60s. Near Mint-
LP...$24.99 29.99 (CD...$1.99, CD...$19.99)
An incredible album – and one of the most revolutionary rock albums of the late 60s! The Who recorded this one as a tribute to mainstream radio at the time – linking together some solid stand alone tunes with shorter, wittier tracks that were recorded as commercials for products that ... LP, Vinyl record album