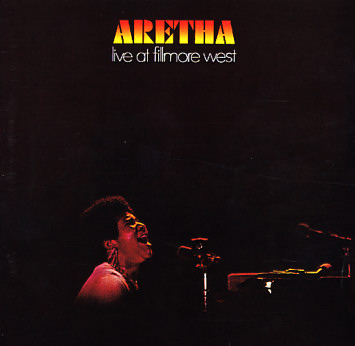 A completely cooking little live set from Aretha Franklin – and a crowning moment not just in her career, but for Atlantic Records soul in general! Aretha's working here before a very enthusiastic crossover crowd at the Fillmore West in San Francisco – getting tight backing from the combo of King Curtis (Memphis Horns, Billy Preston, and Pretty Purdie in tow!) – and hitting a groove that's often rawer, grittier, and more deep-soul tuned than some of her studio sides from the time! The recording quality is totally great – and goes out of its way to preserve the presence of the audience, and showcase Aretha's own interaction and strong sense of personality. Ray Charles makes a surprising guest appearance on one track, but the whole show is really Franklin's own – a majestic little live date that features the tunes "Spirit In The Dark", "Respect", "Make It With You", "Don't Play That Song", "Dr Feelgood", and "Love The One You're With".  © 1996-2022, Dusty Groove, Inc.
(Green and red Broadway label stereo pressing. Cover has light wear.)

With Everything I Feel In Me
Atlantic, 1974. Very Good+
LP...$8.99
Mellow sexy Aretha – with warm arrangements by Arif Mardin, and plenty of nice electric piano by the great Richard Tee. Includes a great version of Stevie Wonder's "I Love Every Little Thing About You", plus the tracks "You Move Me", "You'll Never Get To Heaven" ... LP, Vinyl record album

Sparkle – Music from the Original Motion Picture
Atlantic, 1976. Very Good+
LP...$19.99
A classic 70s soul soundtrack – and a dream of a combination! Curtis Mayfield wrote the soundtrack and produced the album – and the result is a killer batch of 70s soul tracks that matches Aretha's strong vocals with the hip Curtom sound of Chicago! Aretha was still doing pretty well ... LP, Vinyl record album

Risque
Atlantic, 1979. Near Mint-
LP...$24.99
Risque is a massive classic from Chic – a record that's worth it alone for the classic cut "Good Times" – a buoyant groover that was instantly timeless upon release, and went on to transform the sound of disco, hip hop, and many other styles to come! The whole thing's great, ... LP, Vinyl record album