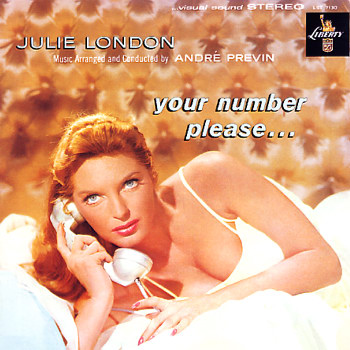 Julie London couldn't look sexier on the cover – reclining in bed, on the telephone with the suggestive title emblazoned across the top – almost like some sleezy ad from the back pages of a local newspaper! The music more than delivers on the suggestiveness, too – and features lush backings by Andre Previn, on an assortment of tunes made famous by male vocal greats of the 50s – tunes that really take on a new sense of life in the hands of Julie – getting special up-close treatment that's really great! Titles include "A Stranger In Town", "Learnin The Blues", "One For My Baby", "It's A Blue World", "When I Fall In Love", and "The More I See You".  © 1996-2021, Dusty Groove, Inc.
(White label mono pressing, with deep groove!)