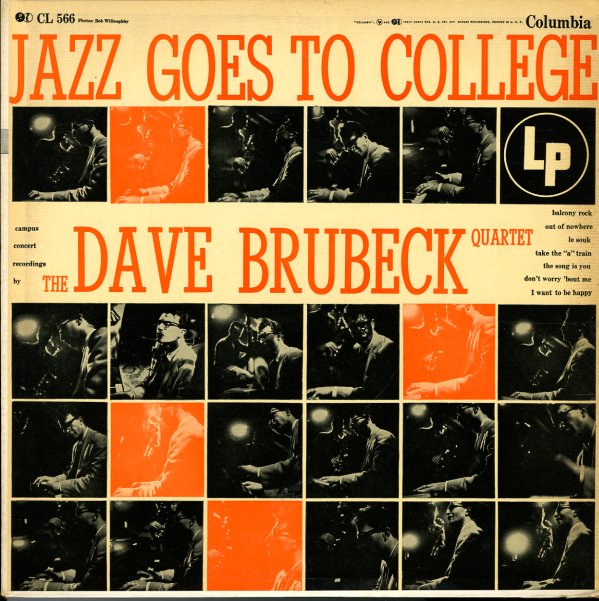 The Dave Brubeck Quartet goes to college – a pretty good place for the combo, considering how many fans they had on campus in the 50s! The sound here is never too academic for the setting, though – just the same sort of Brubeck groove first forged in the small clubs in San Francisco – played beautifully by an incarnation of the quartet that includes Paul Desmond on alto sax, Bob Bates on bass, and Joe Dodge on drums. The long, bluesy "Balcony Rock" is a real gem, with some standout work by Desmond that reminds us that he could be a great improvisor in an extended format – and other tracks include "Out Of Nowhere, "Le Souk", "The Song Is You", "Don't Worry Bout Me", and "Take The A Train".  © 1996-2021, Dusty Groove, Inc.
(Mono 6 eye pressing with deep groove. Back cover has a small name in pen, otherwise cover is in fantastic shape!)

Time Out
Columbia, 1959. Very Good
LP...$29.99 (CD...$2.99, CD...$8.99)
Easily the crowning moment of genius for the legendary Dave Brubeck Quartet – the moment when all things came together magically, and the group somehow elevated themselves to a whole new level in jazz! At the time of the set, Brubeck, Paul Desmond, and the rest had already been making plenty ... LP, Vinyl record album