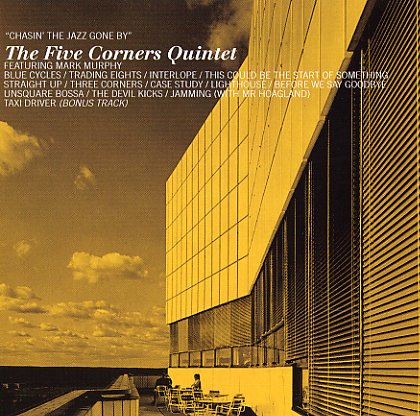 Chasin' The Jazz Gone By (US pressing – with bonus track)

An instant classic from Five Corners Quintet – acoustic jazz played with a dancefloor groove, and the perfect summation of a brilliant run of initial singles! The FCQ return jazz to its grooviest roots – played live, without processing or electronics, and able to hit a snapping groove that takes us back to the days when Blue Note and Prestige got plenty of play on the radio and jukebox! Most tracks roll along in a modal or waltzing mode that shares a lot with the best Nicola Conte projects of recent years – but the group have also got a real feel for their own tonal colors, effortlessly shading in each space and corner of the tunes with a sublime blend of ringing vibes, dancing piano, and beautifully-toned horn passages. Mark Murphy guests on vocals on the tracks "This Could Be The Start Of Something", "Before We Say Goodbye", and "Jamming" – and Okou sings on "Blue Cycles" and "Case Study" – leaving the remaining instrumentals "Trading Eights", "Interlope", "Straight Up", "Three Corners", "Lighthouse", and "Unsquare Bossa". US CD features the bonus tracks "Taxi Driver".  © 1996-2021, Dusty Groove, Inc.
(Out of print.)