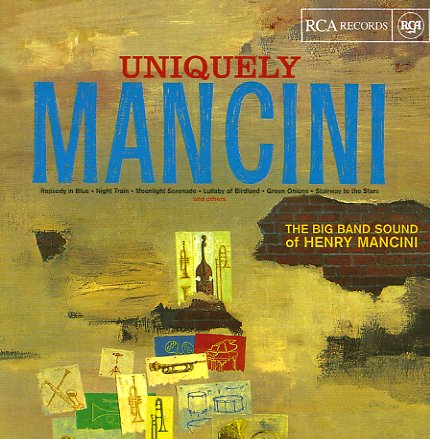 Uniquely Mancini work from the great Henry – a sweet set of early 60s work for RCA, done with a harder jazz style than some of his other work of the time! Mancini's group is filled with west coast jazzmen – working under tight leadership to craft some tracks with a bold, sort of flourish that draws strongly from the late 50s crime jazz styles of Mancini, but which also shows some of his more complicated scoring modes of the 60s. Many tunes are standards, but given a vibrant new swing here – and those are offset by a few especially nice originals composed by Hank, such as "Lonesome", "Cheers", and "Banzai Pipeline". Players include Plas Johnson and Gene Cipriano on flute and tenor, Larry Bunker on vibes and marimba, Bob Bain on guitar, and Pete and Conte Candoli on trumpets – and titles include "Green Onions", "Night Train", "Lullaby Of Birdland", "C Jam Blues", "The Hot Canary", and "Moonlight Serenade".  © 1996-2022, Dusty Groove, Inc.
(Stereo Dynagroove pressing with deep groove. Cover has light wear.)