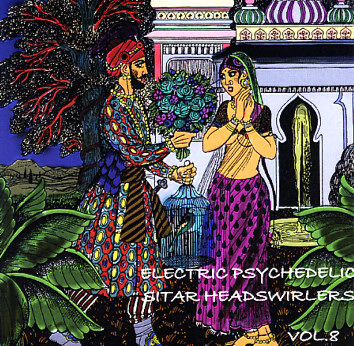 A groovy selection of psychedelic rock & folk from the kaleidoscopic late 60s & early 70s – a disparate batch of lumbering rockers, hazy acid folk, and the occasion jazzy number – varying genre tunes that share a common thread in the ringing sound of the sitar! The tracklists in the Electric Psychedelic Sitar Headswirlers series mix some recognizable names, more cult heroes, and quite a few outright obscurities – spinning groovy stuff at a great price! 18 tracks in all: "Debka" by Churchills, "Journey To The East" by Bill Plummer & His Cosmic Brotherhood, "Jabberwock" by Boeing Duveen & Beautiful Soup, "Anathe" by David Hemmings, "Karma Sitar" by 101 Strings, "Lamento Di Tristan" by John Renbourne, "Spiritual Springs" by Seventh Seal, "Notting Hill Gate" by Quintessence and more!  © 1996-2021, Dusty Groove, Inc.
(Out of print.)

Electric Psychedelic Sitar Headswirlers Vol 5
Purple Lantern, Late 60s/Early 70s. Used
CD...$11.99
Exotic grooves galore – an assortment of psychedelic tunes that draw heavily from Eastern musical influences – and which often have a fair bit of sitar in the mix! The sounds here are a mix of occidental and authentic – tunes carried out in modes that run from rockish to folksy ... CD