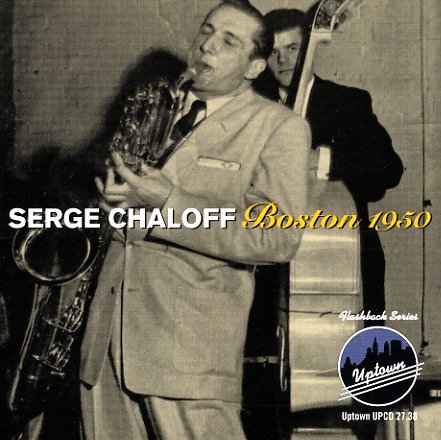 Small group material recorded at the Hi Hat in Boston and the Celebrity Club in nearby Providence, RI. Tracks are pulled from three different dates and feature work by Sonny Truitt on trombone, Nat Pierce on piano, Joe Shulman and George Jones on bass, and Jack McDonald on drums.  © 1996-2021, Dusty Groove, Inc.

Buvette Jazz Club – Rock Island, February 1953
Uptown, 1953. Used
CD...$12.99
Beautiful work from baritone saxophonist Serge Chaloff – one of a few key players who helped reinvent the role of his instrument in jazz during the postwar years – but one who only made a handful of records before his too-early death! This live performance really corrects the lack of ... CD

Baritone Sax Master – A Proper Introduction To Serge Chaloff
Proper (UK), Late 40s. Used
CD...$5.99
Hard-blown baritone from the great Serge Chaloff – one of the greatest jazz players on his instrument, heard here in a set of key late 40s recordings! Serge is perhaps best known for his 2 albums on Captiol – Blue Serge and Boston Blowup – but this collection offers up a great ... CD