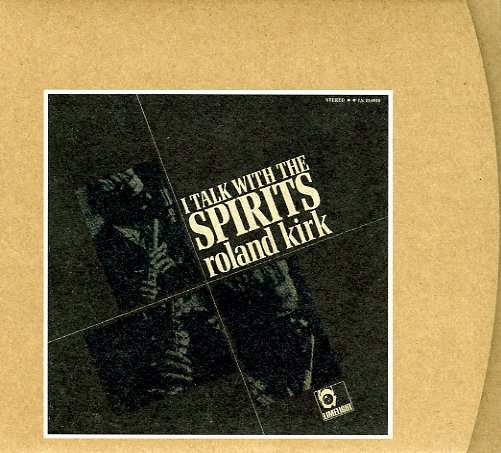 I Talk With The Spirits

One of Roland Kirk's moodiest albums – and a record that really helped him find a big new audience in the 60s! The approach here is a bit different than some of Kirk's more bombastic jazz albums from previous years – gentle, and almost spiritual at times – thanks to heavy use of flute, which Kirk explores with a deeply personal tone – easing out gentle lines that really foreshadow the use of the instrument in the post-Coltrane generation! The record has a dark somber tone at times, and a sweetly redemptive one at others – and the other players include Horace Parlan on piano, Bobby Moses on vibes, Michael Fleming on bass, and Walter Perkins on drums – and the album also features a bit of vocals from Crystal-Joy Albert. Titles include "Ruined Castles", "Trees", "I Talk With The Spirits", and Roland's classic "Serenade To A Cuckoo".  © 1996-2021, Dusty Groove, Inc.
(Out of print, Verve master edition.)

Introducing Roland Kirk
Chess/MCA, 1960. Used
CD...$4.99
Despite the fact that the title's "Introducing Roland Kirk", it's not actually Kirk's first album – but it is a heck of a smoker with a very unusual sound! The session features Roland with a Chicago group that includes Ira Sullivan on trumpet, Don Garrett on bass, and Ron Burton on ... CD

West Side Story
Verve, 1962. Used
CD...$4.99
The West Side Story score – but handled here by the great Oscar Peterson Trio – in ways that really push the tunes past their Broadway roots! The approach is tight, soulful, and filled with strong lines from Peterson on piano – plus bass by Ray Brown and drums from Ed Thigpen ... CD