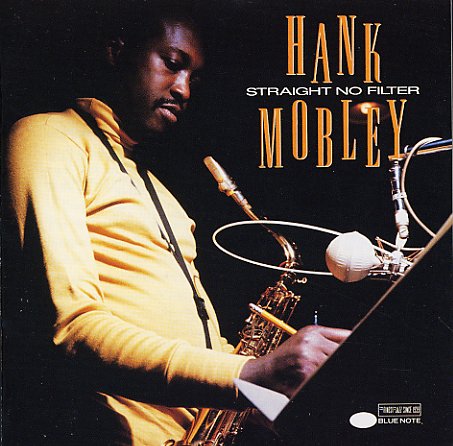 Straight No Filter (with bonus tracks)

No filters here, as Hank Mobley's sound is clean, lean, and right on the money – hitting that newly-sophisticated groove of the Caddy For Daddy years in this sweet unissued set! The date was recorded in the 60s, but unissued by Blue Note for many years – another one of those head-scratching mysteries from the label, yet also a real treat to 80s jazz fans who finally got their hands on the sides – a whole new discovery of Hank Mobley's genius, further appreciated at a time when we weren't hearing more from him. The players are top-shelf all the way through – and include Freddie Hubbard or Donald Byrd on trumpet, Herbie Hancock or Barry Harris on piano, Paul Chambers or Butch Warren on bass, and Philly Joe Jones or Billy Higgins on drums. CD version really expands from the original LP – with 9 titles that include "Chain Reaction", "Third Time Around", "Hank's Waltz", "Yes Indeed", "Straight No Filter", "Syrup & Biscuits", and "The Feelin's Good".  © 1996-2022, Dusty Groove, Inc.
(Out of print, BMG music club pressing. Connoisseur edition.)

No Room For Squares
Blue Note, 1963. Used
CD...$6.99 (CD...$7.99)
An excellent CD reworking of the original Mobley hardbop classic, and one that restores a number of tracks that were originally recorded for the album's session, but which showed up on other Blue Note albums. The whole thing's got 8 cuts in all, some of which didn't appear on the orignal album, ... CD

Slice Of The Top (Connoisseur Series)
Blue Note, 1966/1979. Used
CD...$19.99
A lost session by Hank Mobley – originally recorded in 1966, but not officially issued until 1979, and then only briefly until another short issue in the mid 90s! The record has Mobley really reaching out into a new bag – hitting a more soulfully arranged sound than on some of his ... CD

No Room For Squares (RVG remaster edition)
Blue Note, 1963. Used
CD...$7.99 (CD...$6.99)
No room for squares with grooves this great – a classic Hank Mobley session from the mid 60s, and one that really shows the growth in his style at the time! The work's still strongly in a hardbop style, but modal elements are definitely creeping into the mix – a bolder sense of rhythm ... CD

Soul Station (non RVG edition)
Blue Note, 1960. Used
CD...$6.99
One of the key classics from the hardbop years of Blue Note – the kind of album that really set the label apart from the rest at the time! Soul Station is a deceptively simple album that has tenor giant Hank Mobley playing standards and originals in a quartet with Wynton Kelly on piano, Paul ... CD