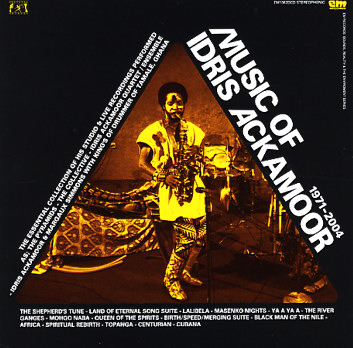 A treasure trove of spiritual jazz from saxophonist Idris Ackamoor – featuring his famous 70s recordings with The Pyramids, solo material, and even some previously unissued titles! The bulk of the collection comes from The Pyramids' albums Birth Speed Merging, Lalibela, and King Of Kings – all freely creative records that build upon traditions initiated by the AACM in Chicago, and taken further groups like The Artistic Heritage Ensemble, The Human Arts Ensemble, or Oneness Of Juju. Many tracks build freely from earthy percussion, bits of vocals, and spiraling solos on saxes and flute – with a sound that's incredibly soulful and righteous – very positive and progressive, and easily some of the best work of this nature from the time! 2CD set features Pyramids tracks "The Land Of Eternal Song (part 3)", "Mohgo Naba", "Queen Of The Spirits (part 3)", "Black Man Of The Nile", "Aomawa", "The River Ganges", and "Masenko Nights" – plus "Spiritual Rebirth", "Centurian", "Topanga", "Cubana", and "Africa" by Idris Ackamoor; as well as "The Shepherd's Tune" by The Collective.  © 1996-2020, Dusty Groove, Inc.
(Out of print. A great package – includes the original oversized jewel case, obi, and a great booklet packed with photos and notes in Japanese and English.)

From The Hot Afternoon
A&M/CTI, 1969. Used
CD...$7.99 (CD...$9.99)
Incredible stuff – and a record that grows more and more important to us over the years! Desmond's best known as the icy alto behind Dave Brubeck's big records of the 50s, but by this point in his career, he'd developed a keen interest in Brazilian music – and was working at a level ... CD