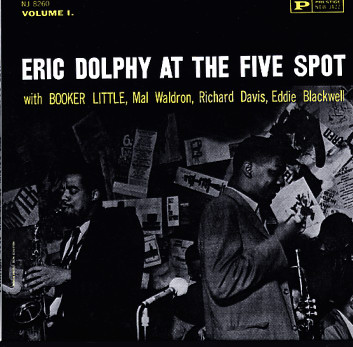 Searing live work from Eric Dolphy – part of a series of recordings that set a whole new standard for live jazz recording! The record features Dolphy going even farther out than on his studio sides from the time – as the record features very long tracks performed by a crack group that includes Booker Little on trumpet, Mal Waldron on piano, Richard Davis on bass, and Ed Blackwell on drums. Despite the length of the tracks, Dolphy isn't as far out as on later European live recordings – but the performance is a great example of his inventiveness within a mainstream structure, and the modernist tendencies of both Waldron and Little shine very brightly in the set. The concert was one of Little's last (and greatest) recordings – sometimes billed as a "memorial", even though he was still alive when it was done – and titles on this volume include "Fire Waltz", "Bee Vamp", and "The Prophet".  © 1996-2021, Dusty Groove, Inc.
(Out of print earlier Japanese pressing.)

Candid Dolphy
Candid (Germany), 1960/1961. Used
CD...$4.99
A collection of work that Eric Dolphy cut for the Candid label in the early 1960s – most of it under the name of other leaders, pulled from a variety of records, and remastered here to make a strong collection of tracks that documents this semi-lost chapter of Dolphy's career. Given the ... CD

Iron Man
Douglas/Fuel 2000, 1962. Used
CD...$8.99
A seminal set from Eric Dolphy – one of his most perfectly realized moments at the head of a larger ensemble – and a record that definitely set the tone for countless spiritual jazz sessions of the 70s! Dolphy recorded this session for Alan Douglas in 1962, and it features a larger ... CD

Walkin' (20 bit remaster)
Prestige, 1954. Used
CD...$11.99
As classic an early album by Miles Davis as you can find – truly filled with the "all star" players billed in the title, and a session that has the sharpness of Davis' bop work for Blue Note, yet also lets him stretch out in a slightly more relaxed format! The album features Miles ... CD