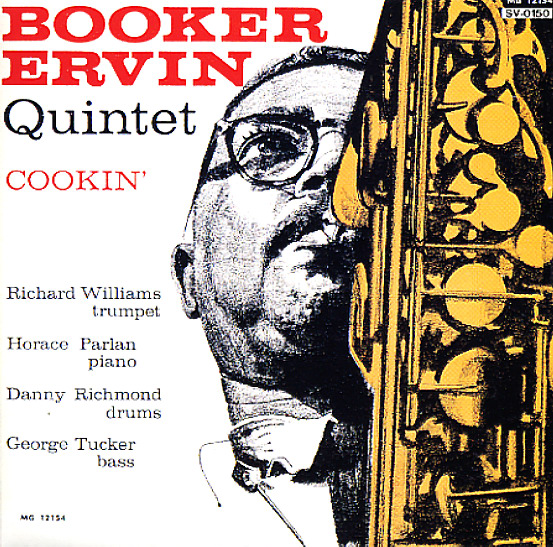 Killer stuff from Booker Ervin – and one of his first sessions as a leader! The album was recorded during a stretch when Ervin was coming into fame as a member of the Mingus group – and he's playing here with a number of Mingus-ites like Richard Williams on trumpet, Horace Parlan on piano, and Dannie Richmond on drums – plus some great bass work from George Tucker – not exactly Mingus, but with a soulful undercurrent that's totally great! The record's got a hardbop groove with a modernist tinge, and it features some excellent playing by Booker that shows off both sides of his style – the deep Texas tenor roots, and some of the sharper tones he picked up with Mingus. Tracks include "Mister Wiggles", "Well Well", "Dee Da Do", and "Down in the Dumps".  © 1996-2021, Dusty Groove, Inc.
(Out of print.)

Freedom Book (RVG remaster edition – with bonus track)
Prestige, 1963. Used
CD...$6.99
One of the most far-reaching, exploratory records cut by Booker Ervin during the 60s – a set that really lives up to the "freedom" in its title! The album really takes off from some of Ervin's other work of the time – and stands along next to the equally-great Space Book as a ... CD

Jazz – It's Magic!
Regent/Savoy, 1957. Used
CD...$16.99
One of the great dates that Curtis Fuller cut for the Savoy label in the late 50s – material that's much more hard-edged than his Blue Note sessions, and which points the way towards a rich legacy of jazz work in decades to come! The group here has a nicely open, laidback approach – ... CD