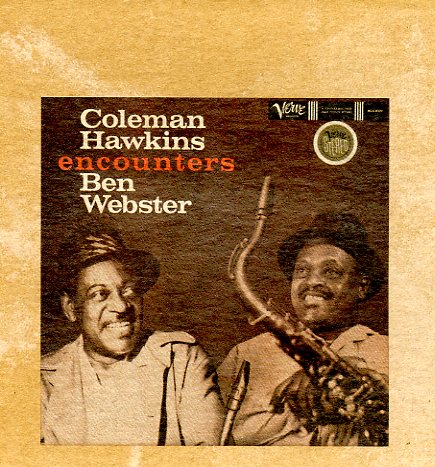 A classic set in the best Verve Records mode – as these two mature giants of the tenor sax get lots of room to open up and solo with a great rhythm section at the core! Both Hawkins and Webster have a fantastic sense of tone and timing – and the space of the record really lets you hear the charms of both in equal measure – with backing from Oscar Peterson on piano, Herb Ellis on guitar, Ray Brown on bass, and Alvin Stoller on drums. The best tracks have lots of room – plenty of space so that the tenors aren't "encountering" each other in too close of quarters, with space to express themselves freely – and titles include "Blues For Yolande", "Rosita", "Shine On Harvest Moon", and "You'd Be So Nice To Come Home To".  © 1996-2023, Dusty Groove, Inc.
(Out of print, Verve master edition in a tri-fold digipack.)

Johnny Hodges With Billy Strayhorn & Orchestra
Verve, 1961. Used
CD...$8.99
Some rare non-Ellington material from Billy Strayhorn and Johnny Hodges – recorded as part of a series done by producer Stanley Dance at the end of the 50s! The feel here is a almost a bit more open and less restrained than the usual Ellington groove – with some standout longer tracks, ... CD

We Don't Die We Multiply
Gitanes/Verve, 1997. Used
CD...$4.99
With Rodney Kendrick on piano, Tarus Mateen on bass, and Turu Alexnder on drums. CD