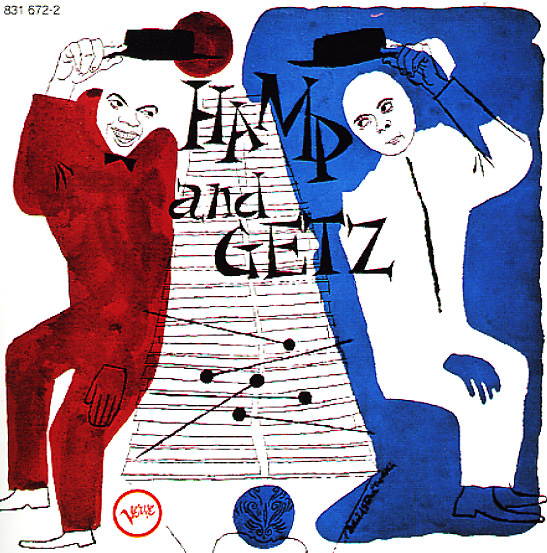 A great little album that's one of Getz's strongest from the period! The format for the album is in the mode of Hampton's early 50s Verve sides – long tracks, very open-ended, cut in a small group format that shows a different side than his more popular big band grooving. There's only 5 tracks on the album – and the focus is on solo work by Hamp and Getz, with rhythm by Lou Levy, Leroy Vinnegar, and Shelly Manne. Titles include "Louise", "Jumpin At The Woodside", "Gladys", and a long ballad medley. Nice David Stone Martin cover, too!  © 1996-2021, Dusty Groove, Inc.
(Out of print.)

Jimmy & Wes – The Dynamic Duo
Verve, 1966. Used
CD...$6.99
Excellent meeting between 2 mighty talents who rarely recorded together! Oliver Nelson did the arrangements and leads a big band, but the real focus is on Jimmy and Wes' solos, which are given a lot of room to roam in long tracks like "James & Wes", "Night Train", and " ... CD

New Jazz Sounds – The Urbane Sessions
Norgran/Verve, Early 50s. Used 2 CDs
CD...$11.99
Kind of a loosely thrown together session that has Carter at the core, Harris joining in on a number of numbers, and Gillespie taking up his horn for the last 2. The record's got a good relaxed Verve feel – and although the style is more jam session in operation, the tracks are short and ... CD

Getz/Gilberto (Verve master edition – with bonus tracks)
Verve, 1964. Used
CD...$3.99
A landmark record – both in 60s jazz and bossa nova – and a set that not only bridged worlds of music, but set the tone for so many other albums to come! By the time of this 1964 set, Stan Getz had already issued a few bossa nova experiments on Verve – but this pairing with ... CD

Count Basie At Newport (with bonus tracks)
Verve, 1957. Used
CD...$4.99
The 50s Basie band, loud and proud – recorded beautifully by Verve on the stage of the Newport Jazz Festival in 1957 – a great year, both for the group and the fest! The lineup here features Count Basie firmly at the helm on piano – with players who include Lester Young, Illinois ... CD