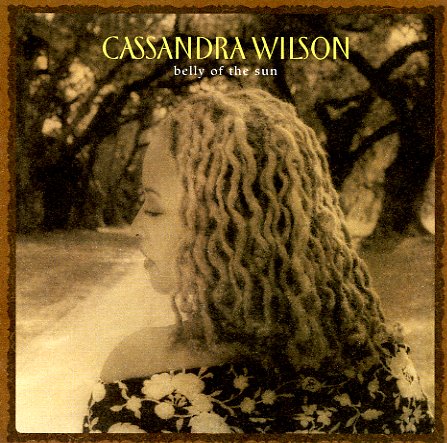 Belly Of The Sun

A laidback, and almost rootsy effort from Cassandra Wilson – recorded with small combo backing, and still handled in the sweetly swinging style of her other Blue Note work – but also with some folksy touches that create a more intimate feel on the record than you might think. Of course, part of the reason for that is that a few of the tunes on the set are classic blues numbers – handled by Wilson in an updated style that has kind of a fake authentic quality to it. We still prefer her on the smoother jazzier sides of the set – like the album's great remake of Jobim's "Waters Of March", or the mellow tune "Only A Dream In Rio". Other tracks include "Road So Clear", "Hot Tamales", "Show Me A Love", 'Drunk A Cooter Brown", "Wichita Lineman", "The Weight", and "Justice".  © 1996-2023, Dusty Groove, Inc.

Blue Light 'Til Dawn
Blue Note, 1993. Used
CD...$0.99 (LP...$31.99)
A beautiful early album from Cassandra Wilson – a singer who already had a really deep sound, right at the start – and definitely hit her stride with music like this! The album mixes jazzy currents with rootsier elements – some of them from a more global perspective – and ... CD

Live In Chicago
Blue Note, 2000. Used
CD...$3.99
We think this guy's one of the best new jazz vocalist to emerge over the past decade, and this album – his 4th for Blue Note – is far and away his best! The album was recorded live at Chicago's Green Mill nightclub – with nice small combo backing by Laurence Hobgood, Rob Amster, ... CD

Man In The Air
Blue Note, 2003. Used
CD...$2.99
One of the best studio albums in years from Kurt Elling – the much-overlooked Blue Note vocalist who's truly one of the greatest singers of his generation! The album returns Elling to a format that we really love – a setting in which he's able to craft his own lyrics to tunes – ... CD