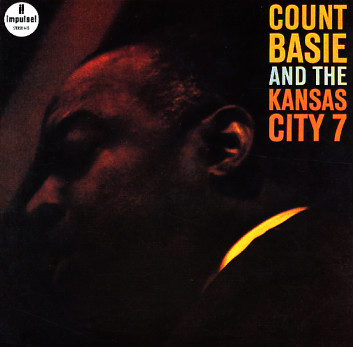 Also available
Count Basie — Count Basie & The Kansas City Seven ... CD 6.99
Stripped-down Count Basie from the start of the 60s – a great little set that has the Count working with some of the best players from his larger group, in a session of even more intimate small combo material! The sounds here echo the Basie groove of the earlier years, but the overall presentation is a fair bit more modern – nicely syncopated with that sense of space discovered by Basie in the 50s – and perfectly interpreted by players who include Thad Jones on trumpet, Frank Wess on flute, Frank Foster on tenor, Freddie Green on guitar, Eric Dixon on flute, and Basie himself on both piano and organ – the latter of which is quite a treat! Titles include "Secrets", "Count's Place", "I Want A Little Girl", "Tally Ho Mr Basie", "Senator Whitehead", "Whatcha Talkin", and "Shoe Shine Boy".  © 1996-2023, Dusty Groove, Inc.

Basie On The Beatles
Happy Tiger, 1969. Very Good+
LP...$13.99
A strangely wonderful album – Count Basie's group performing tunes by the Beatles, and doing a better job than they had on a similar Verve album from a few years before! Part of the credit goes to arranger Bob Florence, who gives the tunes a really fluid swing – with lots of cascading ... LP, Vinyl record album

On A Clear Day
Impulse, 1966. Very Good+ Gatefold
LP...$14.99
One of the best Shirley Scott albums ever – a wonderfully groovy little set that seems to stand head and shoulders above some of her other trio dates of the 60s! Shirley really hits a nice clean groove here – a sense of tone we don't always hear this beautifully on earlier Prestige ... LP, Vinyl record album