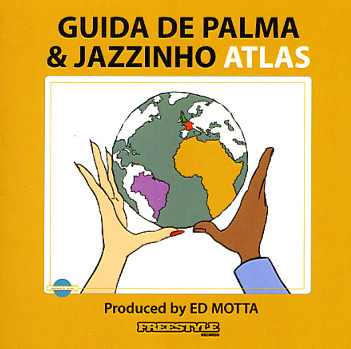 A great group gets even better – thanks to some heavenly production from the legendary Ed Motta! Ed's an artist that we love tremendously for his own work – particularly the recent groundbreaking sides on the Trama label – but here he's working in the studio in support of Jazzinho, giving their already-great groove an added touch of warmth, soul, and imagination! As on their debut, Jazzinho work strongly in a jazzy 70s territory – hitting the best notes of Brazilian fusion from that time, and coming off with an especially soulful sound on the vocals – which are mostly backed up by live combo instrumentation. Ed's participation here runs past even his control of the studio board, as he sings a bit, arranges some, and also plays guitar and percussion – really acting as a special extra member of the group for this set! Main vocals are by Guida De Palma, and titles include "The Lagoon Monster", "Aos Meninos De Angola", "Symmetry", "Tide", "Symetrie", "Afro Luso Brasileiro", "Aos Meninos De Angola", "Cancao De Embalar", "Da Tempo Ao Tempo", and "Look Inside".  © 1996-2020, Dusty Groove, Inc.
(Out of print.)

Return Of Tom Ze – Hips Of Tradition – Brazil Classics 5
Luaka Bop, 1992. Used
CD...$2.99
A great return for the legendary Tom Ze – an artist who'd been brought back to prominence via the efforts of a Luaka Bop compilation – then given this great chance to record for the label on his own! The set's a great return to form for Ze – who sprung from this moment into a ... CD