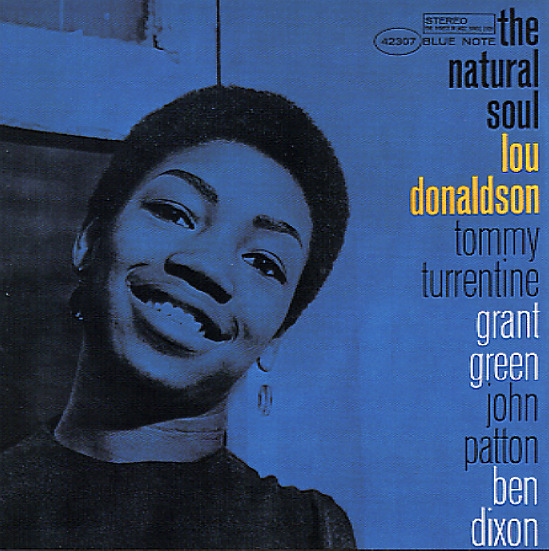 A pivotal record from Lou Donaldson – one that has him forging out some of his first funky soul jazz sounds, moving from his bop roots, and working with a hip young group that includes Grant Green and John Patton, both of whom he discovered and brought to Blue Note (thanks Lou!) The tracks have a tight jaunty feel – very much like those on Patton's mid 60s sides for Blue Note, with lots of room for each player to solo intently – but still a strong focus on the overall groove of the ensemble. Cover's very nice – and tracks include "Funky Mama", "Spaceman Twist", and "Nice n Greasy". CD features one bonus track too – "People Will Say We're In Love".  © 1996-2022, Dusty Groove, Inc.
(2003 RVG pressing.)

Mr Shing-A-Ling
Blue Note (Japan), 1967. Used
CD...$24.99
A massive little record, and a real turning point for alto genius Lou Donaldson – as he uses the set to move from the tight bop of earlier years into a whole new spectrum of funky grooves! Key to this project is drummer Idris Muhammad – who's on the kit, already kicking it up in the ... CD

Sunny Side Up (Japanese pressing)
Blue Note (Japan), 1960. Used
CD...$19.99 (CD...$18.99)
One of the most perfectly crafted moments of Lou Donaldson's hardbop genius at Blue Note – and a beautiful example of the way that Lou could handle the alto sax with a sharpness that earned him a place in the post-Parker lineage – but also a sense of soul that was miles away from Bird! ... CD

Sunny Side Up
Blue Note, 1960. Used
CD...$18.99 (CD...$19.99)
One of the most perfectly crafted moments of Lou Donaldson's hardbop genius at Blue Note – and a beautiful example of the way that Lou could handle the alto sax with a sharpness that earned him a place in the post-Parker lineage – but also a sense of soul that was miles away from Bird! ... CD

Gravy Train
Blue Note, 1961. Used
CD...$6.99
An early 60s killer from Lou Donaldson – one that more than lives up to the promise of its great cover and compelling title! The lineup has Lou blowing in an easy, soulful style – working with a combo that includes Herman Foster on piano, Ben Tucker on bass, and Dave Bailey on drums ... CD

Man With A Horn (previously unissued material)
Blue Note, 1961/1963. Used
CD...$12.99
Hard wailing! Poppa Lou's caught right at the height of his early Blue Note powers here – recorded in 2 different groups on this set of unreleased sessions from the early 60s! Both sets have Lou in a guitar/organ soul jazz setting – with backing by Grant Green on guitar, and either ... CD