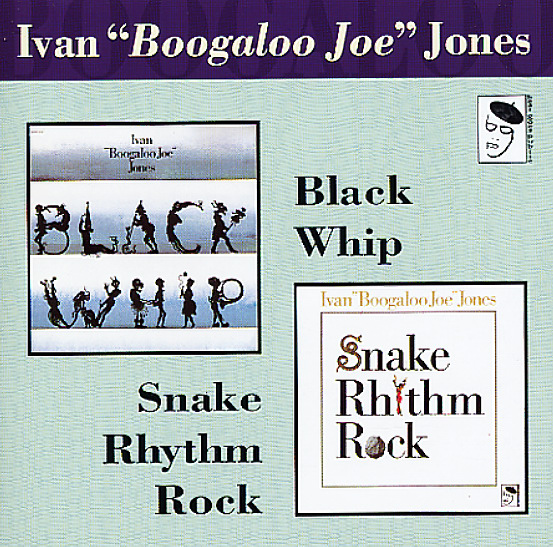 A great 2-in-1 CD that combines the last two albums that Ivan Boogaloo Joe Jones cut for Prestige! Black Whip is amazing stuff from Boogaloo Joe – who unlike some of the other players on Prestige during the early 70s – who often got a bit weaker as the decade moved on, thanks to the departure of some of the better forces arranging and producing the records – Jones kept on playing hard, improving his guitar skill to a point where he was riffing and grooving away at a pace that's simply mindblowing when you hear it. Case in point is the mighty "Black Whip", a fantastic bit of funky jazz that cracks back and forth with all the whiplike qualities hinted at in the title – and which has a totally infectious jazz dance groove that always gets us on the floor. Other titles include the original groovers "Freak Off" and "Crank Me Up", both tasty numbers, plus some mellow pop covers like "My Love" and "Daniel". Snake Rhythm Rock is a tasty batch of funky jazz cuts from Ivan Boogaloo Joe Jones – working here in a tight guitar groove that's actually better than that heard on his early albums for Prestige! The group's a good one – with Rusty Bryant on tenor, Butch Cornell on organ, and Grady Tate on drums – but it's Ivan's funky guitar style that really makes the whole thing work, as his fingerwork on the strings is enough to make any jazz-funk hopeful give up their guitar for life! Titles include "Hoochie Coo Chicken", "Snake Rhythm Rock", "The First Time Ever I Saw Your Face", "He's So Fine", and "Big Bad Midnight Roller".  © 1996-2022, Dusty Groove, Inc.