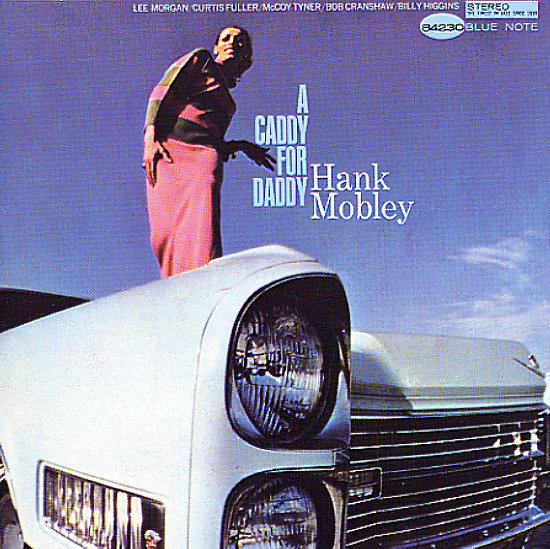 One of the greatest Blue Note albums of all time – a record that's even better than the look of it's cover – which is already pretty darn classic! Hank Mobley had been making records for Blue Note for a number of years before this set – but Caddy For Daddy is one in which he really takes off – mixing earlier hardbop modes with a more complex approach to both rhythm and lyricism – matched with some wonderful work from Lee Morgan in the frontline, who was also really hitting new heights at the time – in a group that also includes Curtis Fuller on trombone, McCoy Tyner on piano, Bob Cranshaw on bass, and Billy Higgins on drums. The group plays this amazing mix of soul jazz and modal grooves that sets a whole new standard in the Blue Note catalog – and every cut is a winner, with titles that include "Venus Di Mildew", "The Morning After", "3rd Time Around", and "Ace Deuce Trey". Fantastic material all the way through, with tracks that will stay in your head for years – and one of the greatest jazz album covers ever!  © 1996-2022, Dusty Groove, Inc.
(Out of print.)

Thinking of Home
Blue Note, 1970. Used
CD...$28.99
One of Hank Mobley's last recordings for Blue Note, and a record that really shows him stretching it out – hitting territory hardly imagined on his earlier hardbop sides! The album's still somewhat inside, but the overall feel is much more spacious than before – a sound that has some ... CD

Slice Of The Top (Connoisseur Series)
Blue Note, 1966/1979. Used
CD...$29.99
A lost session by Hank Mobley – originally recorded in 1966, but not officially issued until 1979, and then only briefly until another short issue in the mid 90s! The record has Mobley really reaching out into a new bag – hitting a more soulfully arranged sound than on some of his ... CD

No Room For Squares (RVG remaster edition)
Blue Note, 1963. Used
CD...$4.99 (CD...$6.99)
No room for squares with grooves this great – a classic Hank Mobley session from the mid 60s, and one that really shows the growth in his style at the time! The work's still strongly in a hardbop style, but modal elements are definitely creeping into the mix – a bolder sense of rhythm ... CD

Straight No Filter (with bonus tracks)
Blue Note, 1966. Used
CD...$22.99
No filters here, as Hank Mobley's sound is clean, lean, and right on the money – hitting that newly-sophisticated groove of the Caddy For Daddy years in this sweet unissued set! The date was recorded in the 60s, but unissued by Blue Note for many years – another one of those head-scratc ... CD

Memorial Album (RVG remaster edition)
Blue Note, 1953. Used
CD...$7.99 (CD...$3.99)
Clifford Brown only recorded a handful of sides for Blue Note – but all of the best ones are included in this excellent album – a full length set that culls together Brown's material from the 10" years, issued as a memorial to his early death in 1956! Side one features Brown with ... CD

At Club Baby Grand Vol 1 (Japanese pressing)
Blue Note (Japan), 1956. Used
CD...$7.99 (CD...$8.99)
Jimmy Smith heard in the kind of setting that spawned him – playing live at Delaware's Club Baby Grand – just the sort of smoky little jazz room that initially fostered his talents! The liveness of the set brings a really nice edge to the album – a sound that's grittier than some ... CD