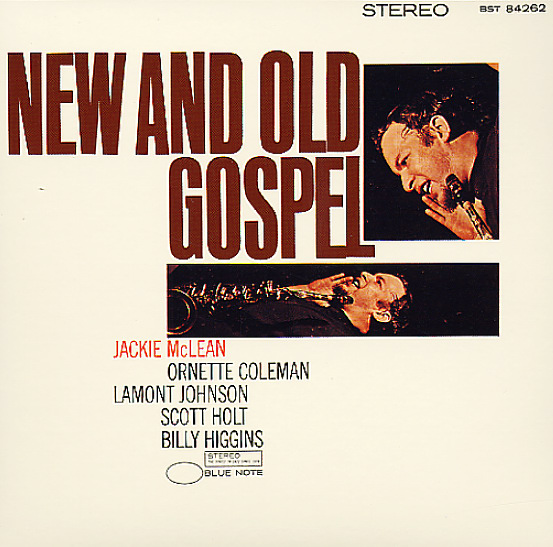 One of Jackie McLean's last "new thing" albums for Blue Note – and a very unique record that features Ornette Coleman on trumpet! The sound here is stark and hard – slight hints of the soulfulness that the "gospel" in the title might imply, mixed with the angular exploratory sound that McLean had been forging at Blue Note during the mid 60s – a wonderful balance that really gives the record a lot of bite! The album's easily one of the most "out" that McLean ever recorded, and the group also includes Lamont Johnson on piano, Scott Holt on bass, and Billy Higgins on drums – all pushing themselves in the company of the avant jazz giants. Tracks include the extended "Lifeline" suite, which takes up all of side one – plus "Old Gospel" and "Strange As It Seems".  © 1996-2022, Dusty Groove, Inc.
(Out of print.)

Destination Out (RVG remaster edition)
Blue Note, 1963. Used
CD...$14.99
A modernist classic from 60s Blue Note! The album's one of Jackie McLean's greatest from the time – and one of his seminal "new thing" sessions cut with young modernists Grachan Moncur III on trombone and Bobby Hutcherson on vibes – both young players who were really finding ... CD

New York Calling (bonus track)
Steeplechase (Denmark), 1974. Used
CD...$19.99
An overlooked gem! During the mid 70s, Jackie McLean cut a few fantastic records that had a very spiritual vibe, and which added in a lot more soul than in previous sessions from the 60s. Part of the strength of these recordings – including this one – is the other musicians in the ... CD

Jackie's Bag
Blue Note, 1959/1960. Used
CD...$12.99
A real classic by Jackie McLean – a record that's pulled from 2 different sessions, but which stands out with a strikingly unified feel! The album was cut during the height of Jackie's bop years for Blue Note – with one 1959 session that featured Donald Byrd and Sonny Clark, and ... CD

Right Now (RVG Remaster Edition)
Blue Note, 1965. Used
CD...$9.99 14.99
Great stuff, and one of Jackie McLean's best for Blue Note from the "new thing" period! The album features Jackie working out a wealth of new ideas, in a quartet that includes Larry Willis on piano, Bob Cranshaw on bass, and Clifford Jarvis on drums. Jackie holds down the frontline ... CD

Bluesnik
Blue Note, 1960. Used
CD...$8.99 (CD...$13.99)
A crackling date from Jackie McLean – a set that's much more hardbop than some of his other Blue Note work – filled with fire, far from the 50s – and really pointing the way towards his new directions to come! There's a hint of modernism in the mix, mostly on the tone from McLean' ... CD

New Soil (with bonus track)
Blue Note, 1959. Used
CD...$22.99
If you ever needed a record to re-remind you of the genius of Jackie McLean, this Blue Note classic may well be it! At first glance, the session appears to be the usual sort of date – a quintet outing, with help from Donald Byrd on trumpet, Walter Davis on piano, Paul Chambers on bass, and ... CD

Swing Swang Swingin' (Japanese pressing)
Blue Note (Japan), 1959. Used
CD...$14.99 (CD...$14.99)
Jackie McLean cut some of his best bop sessions for Blue Note – and this is one of them! The record is amazingly precise, and features Jackie as the sole horn soloist in a group with Walter Bishop on piano, Jimmy Garrison on bass, and Art Taylor on drums – a crack rhythm combo that ... CD

Swing Swang Swingin'
Blue Note, 1959. Used
CD...$14.99 (CD...$14.99)
Jackie McLean cut some of his best bop sessions for Blue Note – and this is one of them! The record is amazingly precise, and features Jackie as the sole horn soloist in a group with Walter Bishop on piano, Jimmy Garrison on bass, and Art Taylor on drums – a crack rhythm combo that ... CD