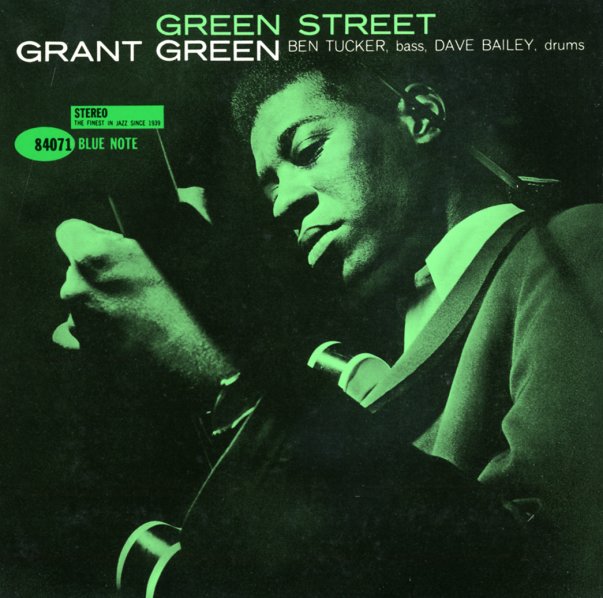 Also available
Grant Green — Green Street (with bonus tracks) ... CD 6.99
One of the earliest albums as a leader from guitar genius Grant Green – and a set that shows off a different side of his talents than some of his other records of the time! The date has Grant working in a trio – with Ben Tucker on bass and Dave Bailey on drums – a super rhythm duo who are both soulful and modern, and who really have a great sense of matching the right modes of Green's guitar – which includes a number of those strong, long runs that always leave us breathless in these early years. The album has no Hammond or tenor – more frequent pairings with Green's instrument – and the open space really gives you the chance to hear what a completely inventive player Grant was, right from the start. The whole thing's great – and the album's got some great original titles that include "No 1 Green Street", "Grant's Dimensions", and "Green With Envy" – all of which sound a lot better than their gimmicky titles! CD features 2 bonus alternate takes!  © 1996-2022, Dusty Groove, Inc.
(Out of print.)

Feelin' The Spirit (non-RVG edition)
Blue Note, 1962. Used
CD...$4.99 6.99 (LP...$36.99)
Guitar genius Grant Green is definitely feelin the spirit here – as he mixes his lean 60s style with a host of traditional numbers from the spiritual canon – at a level that provided a whole new sense of soul at the time! There was plenty of music influenced by gospel during the decade ... CD

Goin' West (RVG remaster edition)
Blue Note, 1962. Used
CD...$12.99
A beautiful stripped-down session that was recorded in the mid 60s, but not issued until the end of the decade, for some strange reason! Grant Green plays guitar in a laidback quartet with Herbie Hancock on piano, Reggie Workman on bass, and Billy Higgins on drums – all working wonderfully ... CD

Born To Be Blue
Blue Note, 1962. Used
CD...$6.99
A rare one from Grant Green – recorded in 1962, but not issued until 1985. The set's one of Green's early classics recorded with pianist Sonny Clark – a deeply soulful player who really had the right feel for Green's more lyrical soul jazz numbers. The rest of the group includes Ike ... CD