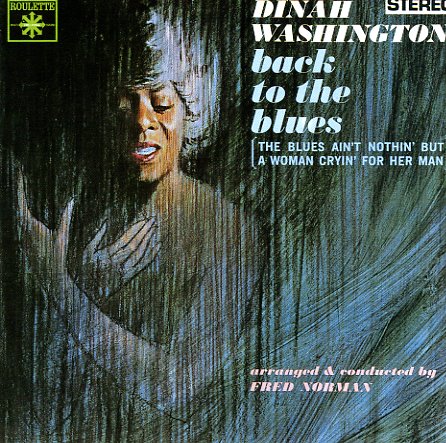 Back To The Blues (with bonus tracks)

A bit different than some of Dinah Washington's other 60s work for Roulette – a set that's not entirely back to the blues promised in the title, but one that's definitely got a strong bluesy undercurrent! The backing's, by Fred Norman, aren't nearly as lush as on other Roulette sessions – more in a punctuated mode that's a bit in Ray Charles territory of the time – a more polished take on older bluesy modes, with some nice jazz moments from time to time. Titles include "It's A Mean Old Man's World", "Key To The Highway", "Duck Before You Drown", "No Hard Feelings", "Romance In The Dark", "Let Me Be The First To Know", and "You've Been A Gold Old Wagon". CD features 3 bonus tracks – 2 previously unissued – "No One Man", "Me & My Gin", and "Don't Say Nothing At All".  © 1996-2021, Dusty Groove, Inc.
(Out of print.)

In Person At The Americana
Liberty/DRG, 1964. Used
CD...$14.99
A rare live session from Julie London – surprising in that most of her classic work for Liberty was put together with some real studio magic! Yet this time around, the live setting's a real charm – one that makes for a whole new side of London's personality – showing the singer ... CD