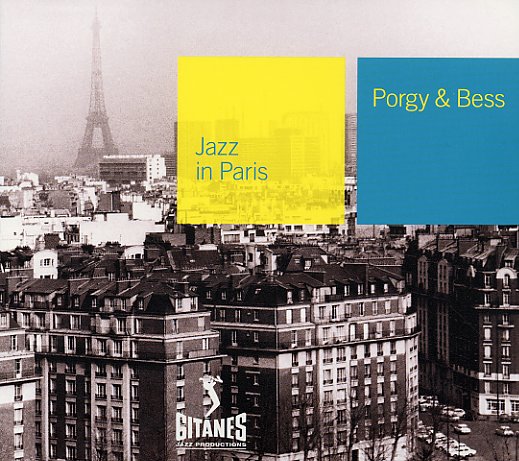 A lost funky version of Porgy & Bess! Forget all the cliches you've ever heard in jazz versions of Gershwin's over-recorded musical – because this totally hip session from 1971 features big band arrangements by Ivan Jullien, a great bandleader who works in a style that's somewhere between Verve sides with Oliver Nelson and the MPS recordings by the Clarke-Boland Big Band. Even more important, though, is the fact that the whole album's dominated by the soulful organ of Eddy Louiss – a vastly overlooked player who's sort of the Larry Young of the European scene of the 60s. Louiss' tone on the record is great – and the whole thing's so masterfully put together that you barely recognize the original material at all, which is why the whole thing sounds so darn fresh! Titles include "My Man's Gone Now", done as if it's been lifted from some blacksploitation soundtrack – plus "There's A Boat Dat's Leavin", "Street Cries", and "Gone Gone Gone".  © 1996-2021, Dusty Groove, Inc.
(Out of print.)

Underground
Universal (France), 2006. Used
CD...$8.99
Deeply textural jazz work from saxophonist Chris Potter – working here in a group with Wayne Krantz on guitar, Craig Taborn on Fender Rhodes, and Nate Smith on drums! The sound's a bit similar to some of the recent Blue Note generation – soulful one minute, modern the next – with ... CD

Jazz In Paris – The Best Live Concert Vol 1
Universal (France), 1965. Used
CD...$13.99
A very lively set from Louis Armstrong – recorded in Paris in the mid 60s, at a time when Satch was at the height of his global popularity! The crowd is clearly very enthusiastic, and Armstrong responds with some great patter in between the tunes – really keeping things going with that ... CD

Chubby's Back (Japanese paper sleeve version)
Universal (Japan), 1957. Used
CD...$24.99
With a name like Chubby, the set ought to be a snoozer – but it swings nicely, thanks to some strong bass work by Jackson! The group's a Chicago ensemble, featuring lesser-known players of the 50s – like Vito Price, Cy Touff, Don Lamond, and Jimmy Gourley – plus trombone by Bill ... CD

Play Bach 1
Decca/Universal (France), 1959. Used
CD...$9.99
A groundbreaking album for the Paris jazz scene – a fusion of classical styles with jazz playing, perfect for selling American music to a snooty European audience! Although Loussier's formula was often copied during the 60s, at the time of these recordings, his mix of jazz and classical ... CD

Swinging The Loop
Argo/Universal (Japan), 1958. Used
CD...$9.99
Rare work from obscure Chicago tenor player Vito Price – recorded back in the days when there actually used to be a jazz scene in the city's center – also known as The Loop! Price was a New Yorker by birth, but worked in Chicago clubs, TV, and radio in the 50s – and was most ... CD