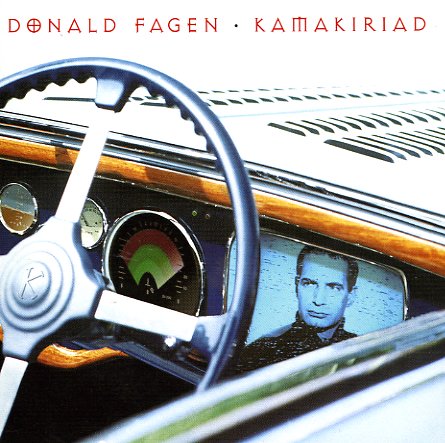 Also available
Donald Fagen — Kamakiriad (Japanese pressing) ... CD 12.99
A surprisingly nice album from the better half of Steely Dan! This one kind of got cut out immediately when it was issued in 1993, but it's got a heck of a lot of charm – and given the success and style of the re-formed Steely Dan's Two Against Nature, this one sounds pretty great when we look back over our shoulder. And oddly, it's got some nice little modern soul arrangements that struck a strong note with the soul underground – and we can testify to the fact that the record was selling big with the stepper's scene in Chicago, even when it was stiffing in the pop racks elsewhere! Nothing fancy, but there's some nice moments, and with Walter Becker doing the production, it's kind of a Steely Dan album anyway. Titles include "Trans Island Skyway", "Countermoon", "Tomorrow's Girls", "On The Dunes", and "Snowbound".  © 1996-2022, Dusty Groove, Inc.

Kamakiriad (Japanese pressing)
Reprise (Japan), 1993. Used
CD...$12.99 (CD...$4.99)
A surprisingly nice album from the better half of Steely Dan! This one kind of got cut out immediately when it was issued in 1993, but it's got a heck of a lot of charm – and given the success and style of the re-formed Steely Dan's Two Against Nature, this one sounds pretty great when we ... CD

GP/Grievous Angel
Reprise, 1973/1974. Used
CD...$5.99
Both albums complete on one CD! First up is the seminal Gram Parsons solo debut, and arguably his most consistant post-Burritos album. GP is pretty much the record that put the country in country rock – with a sharp steel guitar cry throughout, an unpretentious proud/poor delivery, and ... CD