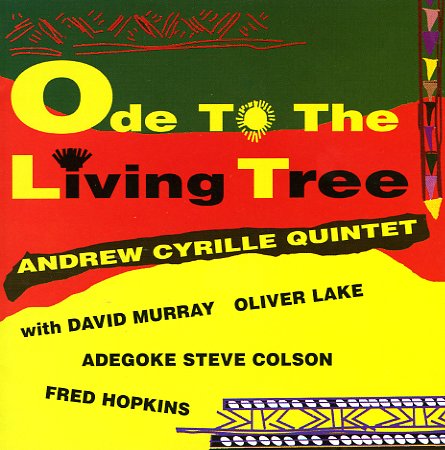 Ode To The Living Tree

Pure genius from Andrew Cyrille – a record that's got a bit more of a soaring, spiritual vibe than some of his more freely improvised work of the past – a set that marks a key chapter in this stretch of the drummer's career, similar to his album on DIW at the same time! The group is excellent – with David Murray on tenor and bass clarinet, Oliver Lake on alto, Fred Hopkins on bass, and Steve Colson on electric piano – stretching out on long tracks that are filled with modal changes! The album includes a very nice 20 minute remake of "A Love Supreme", plus the originals "Dakar Darkness", "Ode To The Living Tree", "Coast To Coast", and "Water, Water, Water".  © 1996-2021, Dusty Groove, Inc.
(Out of print, punch through barcode.)

Traveling On
Evidence, 1996. Used
CD...$6.99
An excellent recent album from modernist trumpet giant Ted Curson! The set was recorded in Japan – in a very respectful format that has Curson exploring a number of different idioms from previous years. The best tracks are long drawn out numbers with a modal/modern groove – Curson's ... CD

Keep The Customer Satisfied (Jazz Heritage pressing with bonus tracks)
Pacific Jazz/Jazz Heritage, 1970. Used
CD...$5.99
Buddy certainly knew how to keep the customer satisfied – as you'll hear on this hip set of big band grooves, recorded by Buddy for Liberty Records in 1970. The set's got Buddy working with a tight group of younger players, in a mode that's not exactly funky, but which owes a lot to the ... CD