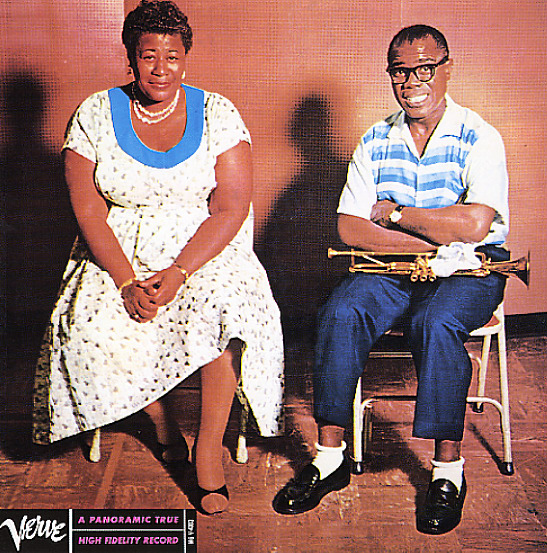 A legendary pairing of two classic postwar singers – each of whom were really finding their own sort of sound in the 50s, then found a way to make some real magic together on a record like this! Louis Armstrong was very much senior to the younger Ella Fitzgerald – but both had become such beautifully expressive singers, their voices here really ignite a special sort of energy that maybe even elevates the record past some of their solo sets of the time. Backings are in a nice small combo mode – with Armstrong on both trumpet and vocals – and Ella and Louis carry most of the set with their great vocal interplay – warm, personal, and pretty darn charming – in a mode that should be hokey, but comes across great, thanks to the quality of both vocalists! Titles include "April In Paris", "Can't We Be Friends", "Isn't This A Lovely Day", "Under A Blanket Of Blue", and "A Foggy Day".  © 1996-2023, Dusty Groove, Inc.
(Early 80s mono Japanese Polydor pressing – 18MJ-9024 – with obi and insert.)

Immortal Jazz Series On Verve II Vol 10 (aka Billie Holiday At Jazz At The Philharmonic)
Verve (Japan), 1945/1946. Very Good+ Gatefold
LP...$19.99
Some of the earliest Billie Holiday work for Verve Records – material recorded in a mid 40s Jazz At The Philharmonic session, already showing the great setting the label was able to allow! Billie's voice is wonderful – really coming into its own mature modes – and backing is by a ... LP, Vinyl record album

Come Swing With Me
Verve, 1958. Near Mint-
LP...$29.99
Despite the image of a lady on the cover, Tony Travis is a male singer – and a pretty nice one at that! This album's the only one we've ever seen by Travis, but it's a gently-swinging session done in a Sinatra-styled mode – recorded with a fair bit of jazz in the back of the ... LP, Vinyl record album

Newport Years Volume 1 (aka Ella Fitzgerald & Billie Holiday At Newport)
Verve, 1957. Near Mint-
LP...$7.99
Two of the biggest singers who ever worked for Verve Records – captured perfectly at the Newport Jazz Festival in 1957! Ella Fitzgerald steps out with a strong, lively groove on the first half of the set – swinging things with a looser, more upbeat quality than on some of her mellower ... LP, Vinyl record album

Frances Faye In Frenzy
Verve, Late 50s. Very Good
LP...$5.99
A rare set from singer Frances Faye – and a great one, too – thanks to arrangements from Russ Garcia! LP, Vinyl record album

Torme
Verve, 1958. Near Mint-
LP...$24.99
An overlooked gem from Mel Torme – a great early album for Verve, one that's every bit as nice as his stellar work for the Bethlehem label! The set's got Mel singing with the Marty Paich orchestra – a good thing, too – as Marty's always been the best arranger for Mel's unique way ... LP, Vinyl record album

Back In Town
Verve, Mid 50s. Very Good+
LP...$14.99 (CD...$14.99)
Very groovy stuff – and a rare vocal group date from Mel Torme's later years! The album has Mel reprising the sound of his classic Mel-Tones vocal group during the 40s – but given the more modern setting, the sound here is a lot hipper than their original recordings – more in the ... LP, Vinyl record album