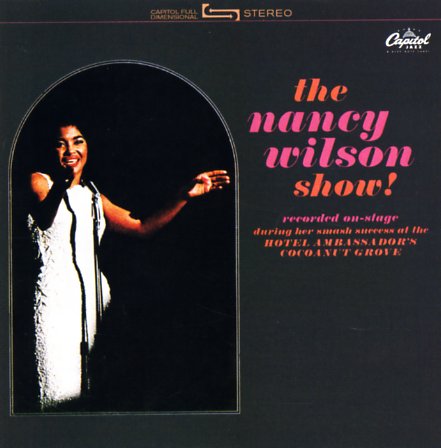 Early proof that Nancy Wilson was definitely on the right track with her career – a tremendous little live date recorded without any of the schmaltz or overdone showmanship of her contemporaries! Although the setting is the Cocoanut Grove, Nancy often makes us feel like she's putting over the tunes in a much smaller venue – working in an up-close, personal way that's really wonderful – almost telling stories with the lyrics on the tunes, and always singing, but making her vocals feel more like conversation. Ronnell Bright did some great backings for the performance – and titles include "Fireworks", "Ten Good Years", "Guess Who I Saw Today", "Don't Talk Just Sing", "You Can Have Him", and "The Music That Makes Me Dance".  © 1996-2021, Dusty Groove, Inc.
(Out of print. Please note the tray card is wavy on one side from moisture and has a small rip on the spine – booklet is clean.)