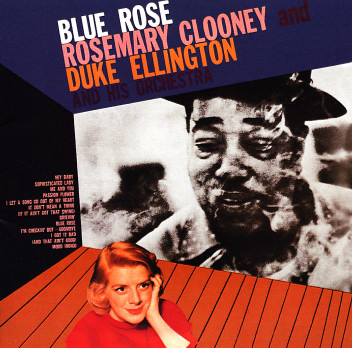 Fantastic stuff, and proof that Rosemary Clooney was always one heck of a great singer – with strengths in jazz that you didn't always hear in her pop work! As you'd guess from the cover, Duke Ellington's leading the group on the album – and most of the tracks here are older Ellington standards, reworked with bold vocal lines from Clooney – in a way that's right up there with any of the usual singers with Ellington's band! Players include Clark Terry, Cat Anderson, Johnny Hodges, Paul Gonsalves, and Harry Carney – and titles include "I'm Checkin Out", "Mood Indigo", "Blue Rose", "Grieving", "Hey Baby", and "Passion Flower". CD features 2 bonus tracks – "If You Were In My Place" and "Just A Sittin & A Rockin".  © 1996-2020, Dusty Groove, Inc.
(Out of print.)

I Just Dropped By To Say Hello
Impulse/MCA, 1963. Used
CD...$3.99 (LP...$11.99)
A beautiful album of dark-hued vocals – sung by Johnny Hartman with a quality that's as smokey as the image of him with a cigarette on the cover! The album set a whole new standard for male vocal jazz in the 60s – and is a distillation and refinement of earlier ideas in music by Billy ... CD