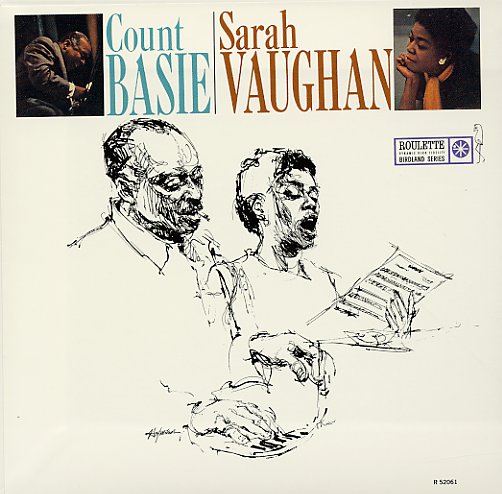 Sarah Vaughan gets some backing from Count Basie – making for a record that's one of her jazziest and swinging of the time! As with other Basie-related vocal sessions from the early 60s, this one has a soulful edge and a nice little bounce – one that makes for a more solid approach that gets Sarah's jazz vocals firmly back on track, and away from some of the more overly-produced ballad albums of the time. We like those records too – but on a record like this, she really gets back to basics! Titles include "Perdido", "You Turned The Tables On Me", "Mean To Me", "Alone", "Little Man", and "The Gentleman Is A Dope".  © 1996-2022, Dusty Groove, Inc.
(Out of print.)

Kansas City Suite – The Music Of Benny Carter/The Legend
Roulette/Vogue (France), Early 60s. Used
CD...$6.99
A great little set – despite our initial fears! We'll admit that we're the first ones to shy away from anything that says "Kansas City" in the title – as we expect a lot of hoke – but this album's a surprisingly great batch of tunes, original numbers written by Benny ... CD

Stan Getz At Storyville Volumes 1 & 2
Roulette/EMI (UK), 1951. Used
CD...$3.99
A great CD that combines volumes 1 and 2 of Stan's early live recordings at Storyville – excellent small group sessions done with a group that includes Jimmy Raney on guitar, Al Haig on piano, Teddy Kotick on bass, and Tiny Kahn on drums. The mix of guitar and tenor is great together – ... CD