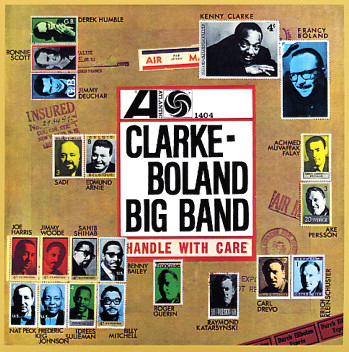 Complete Live Recordings At Ronnie Scott's – Volcano/Rue Chaptal
MPS/Rearward (Italy), 1969. Used
CD...$14.99
A large group in a small club – the legendary Clarke Boland Big Band, playing at the home turf of one of their key members – tenorist Ronnie Scott! The set features a very legendary performance by the ensemble – a crack lineup that's easily one of the best ever sported by the ... CD

Blowing The Cobwebs Out – The Campi Years
Emanon (Germany), 1969/1970. Used 2 CDs
CD...$43.99 59.99
Amazing work from this legendary ensemble – with selections from Volcano, Rue Chaptal, At Her Majesty's Pleasure, and Off Limits. Packaged in a beautiful longbox, with a booklet rich in information, and a cool packaging style for the CDs! CD

En Concert – 29 Octobre 1969
Trema (France), 1969. Used 2CD
CD...$8.99
Great live material from the best years of this amazing ensemble that included some of the finest American and European players of the 60s! The band's at its best here – wailing away in a firey live setting, recorded with high quality by Europe 1 Radio in 1969. Players include Tony Coe, ... CD