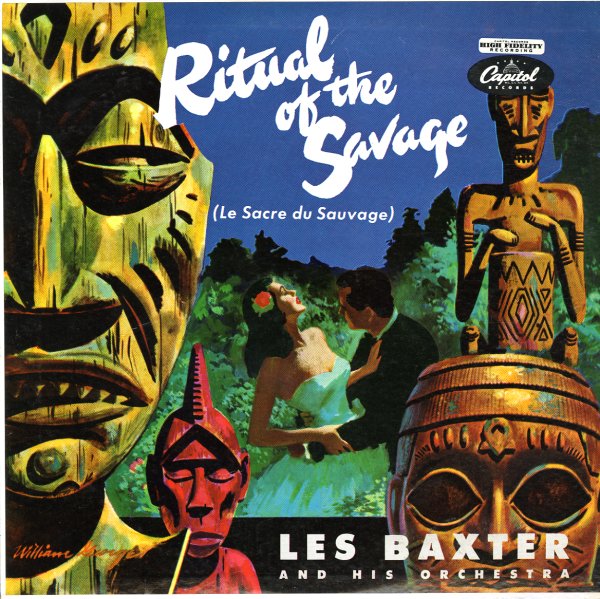 Le Sacre Du Sauvage (aka Ritual of the Savage) (10-inch)

A masterpiece of exotica! Ritual Of The Savage is one of those must-have albums from the 50s – a super-huge record upon its initial release, and an album that pushed the genre of exotica far further than most others at the time! Before this record, most attempts at exotica were simple instrumental pop, colored with slight worldly instrumentation – or too-dreamy recordings, putting over a sleepy version of life on the islands. Enter Les Baxter, who had an amazing ear for sounds, rhythms, and arrangements – one that was the first to record this sort of music in a way that was sonically evocative, and could stand on its own without other referents. Instrumentation is often conventional, but used oddly here – and Baxter's original compositions are all pretty darn great – playful without being goofy, and nicely mixing Latin and Pacific rhythms at the bottom. Titles include "Busy Port", "The Ritual", "Coronation", "Jungle Jalopy", and Les' original version of "Quiet Village". Heck, even the cover is gorgeous – with a brilliant blue illustration of some guy putting the moves on a woman amidst spooky tribal relics!  © 1996-2023, Dusty Groove, Inc.
(Mono maroon label pressing. Cover has a small sticker at the top right corner, looks great otherwise.)