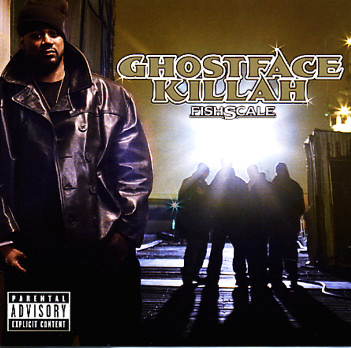 Ghostface brings some real hip hop to latter day Def Jam – his best album since Supreme Clientele – and possibly '06 hip hop album of the year! Fishscale features appearances by the Wu Tang Clan & Theodore Unit, Ne-Yo, Megan Ward and others on the mic – but it's the stable of producers that helps make this one of the best above ground hip hop albums we've heard in a long time. MF Doom puts his Metal Fingerz behind the boards for a bunch of tracks, and the legendary Pete Rock handles a few – with additional work by J Dilla, Just Blaze, Lewis Parker and others. Ghost brings a literal lyrical focus to a number of the tracks – but he's still spraying words all over the damn place – and the best tracks are just as thrilling as his surreal word bombs of yore.Tracks include "Shakey Dog", "Kilo" feat Raekwon, the excellent Just Blaze-produced anthem "The Champ", "9 Milli Bros" feat Wu Tang Clan, "Beauty Jackson", "RAGU" feat Raekwon, "Be Easy" feat Trife, "Dogs of War" feat Raekwon & Theodore Unit, "Barbershop" and more.  © 1996-2023, Dusty Groove, Inc.
(Out of print, punch through barcode.)