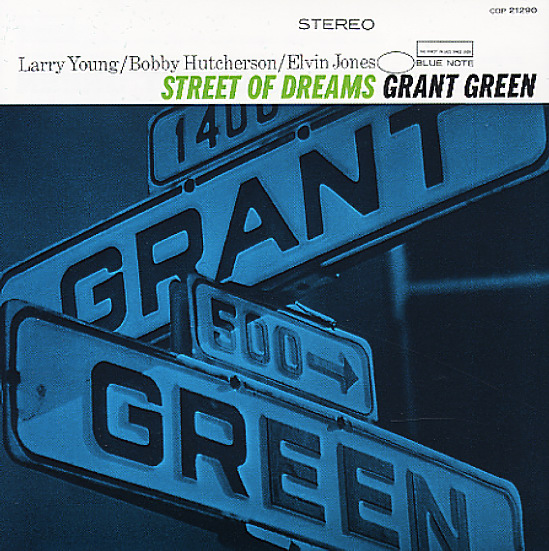 One of our favorite albums ever from guitarist Grant Green – an amazingly stretched-out session that's served up with a good deal of modal jazz in the rhythms – and a date that features killer work from Larry Young on organ and Bobby Hutcherson on vibes! The pair join Green in a quartet that also includes Elvin Jones on drums – who provides a loose, fluid approach to rhythm that really sets the tone for the date – a flowing vibe that folds together the organ, guitar, and vibes beautifully – with an incomparable floating vibe that's pure magic! All tracks are long and very open – and titles include "Street Of Dreams", "Somewhere In The Night", and "Lazy Afternoon".  © 1996-2021, Dusty Groove, Inc.
(Out of print original CD pressing.)

First Session (previously unreleased)
Blue Note, 1961. Used
CD...$14.99
Grant Green's first-ever session as a leader – recorded by Blue Note in 1960, and not issued until decades later! The set features Green's guitar playing in a piano quartet, with rhythm by Wynton Kelly, Paul Chambers, and Philly Joe Jones – about as fine a backing trio as Green could ... CD

Blue Train (The Ultimate Blue Train edition)
Blue Note, 1957. Used
CD...$3.99 (CD)
John Coltrane's classic – and only – recording as a leader for Blue Note! The album's no throwaway date, though – as it stands strongly with both Coltrane's other label work of the time, and with the best of the late 50s Blue Note scene – a time when the label was really ... CD

Live At The Lighthouse (3CD set – with bonus tracks)
Blue Note, 1970. Used 3CD
CD...$44.99
An incredible album from Lee Morgan – one of his last records ever, and a set that shows a whole new promise in his music – one that was sadly unfulfilled as a result of his tragic early death. The songs hare are all quite long – stretched out live numbers, but never in a way ... CD