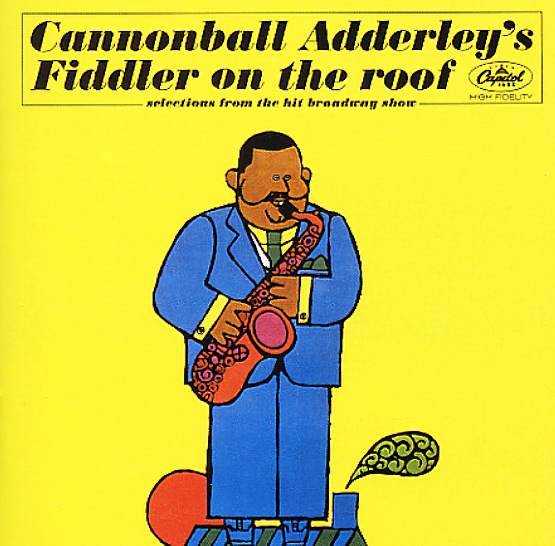 Cannonball Adderley's Fiddler On The Roof

Once again, Cannonball Adderley proves the old jazz adage – it's not the song, but the singer – as he breathes fantastic new life here into a set of tunes from the musical Fiddler on the Roof! Yet in thinking of the music, there's also a special sort of genius – as there's some exotic currents in most of the melodies, which may be why the young producer David Axelrod chose the tracks for the set – as they've got the same blend of hardbop and exotic elements that you'll hear on some of the original tunes by this group. The lineup is great – Nat Adderley on cornet, Charles Lloyd on reeds, Joe Zawinul on piano, Sam Jones on bass, and Louis Hayes on drums – and the tones of Cannon and Lloyd are great together – and the make the best songs sound like strange Eastern-tinged jazz numbers. Tunes include "To Life", "Fiddler On The Roof", "Cajvalach", "Sewing Machine", "Matchmaker", and "Now I Have Everything".  © 1996-2022, Dusty Groove, Inc.
(70s red label pressing. Cover has surface & edge wear, old price sticker remnant.)

Presenting Cannonball Vol 2
Savoy (Japan), 1955. Very Good+
LP...$34.99
A rare Japanese version of this set – with all alternate tracks! The set is one of Cannonball Adderley's first albums – recorded for Savoy way back in 1955, and done with a free and open style that's a nice contrast to his tighter sides for Mercury! The album's very relaxed – ... LP, Vinyl record album

Julian Cannonball Adderley
EmArcy, Mid 50s. Very Good
LP...$14.99 (CD...$9.99)
Very early work from Cannonball Adderley – recorded way before the funky years, when he was a hard-wailing soulful soloist with a lot of bop in his style! Cannon's paired here with brother Nat, a good companion even at this early stage – and the two of them solo in front of a large ... LP, Vinyl record album