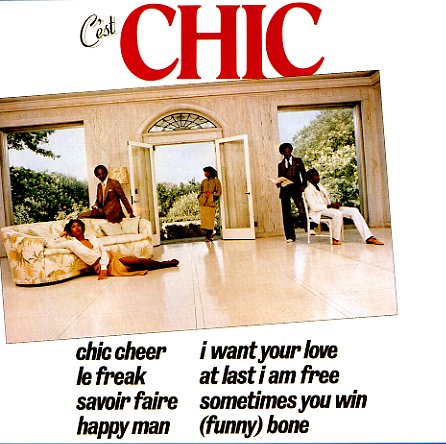 A massive set from the legendary Chic – and a set that has the dancefloor combo coming down perfectly throughout! Riffing Nile Rodgers guitars really make the tunes cook – as does the superb production – and although the record played plenty in discos and radios of the mainstream, it's still got a raw funky power that holds up brilliantly over the years! The set features the legendary "Le Freak" – a classic cutting track from the old school – plus "I Want Your Love", "Sometimes You Win", "Savoir Faire", "Happy Man", and "(Funny) Bone".  © 1996-2023, Dusty Groove, Inc.
(Rockefeller label pressing. Includes the printed inner sleeve. Cover has minimal wear.)

Real People
Atlantic, 1980. Sealed
LP...$6.99 9.99
Not really any hits on this one, but Nile Rogers and the group still keep grooving along – wangling that pop disco groove with amazing sharpness! Titles include "Chip Off the Old Block", "Open Up", "26", "I Loved You More", "Real People", and ... LP, Vinyl record album

Up On The Roof – The Best Of The Drifters
Atlantic, Late 50s/Early 60s. Very Good
LP...$9.99
Seminal work from the post-Clyde McPhatter version of The Drifters – a sublime batch of singles that really showcase all that's great from the second chapter of the group! The set's way more than a "best of" – as it was the only full album to feature most of these cuts – ... LP, Vinyl record album

Wicked Pickett
Atlantic, 1966. Very Good
LP...$14.99
A breakout record that forever put Wilson Pickett at the top of the heap for mainstream 60s soul – thanks to the oft-covered, endlessly played "Mustang Sally" single that leads off the set! And although the groove established by that track helped Pickett establish an audience on ... LP, Vinyl record album

Midnight Rendezvous
Atlantic, 1979. Very Good
LP...$0.99
A lasting classic from singer Tasha Thomas – a vocalist who'd already lent her talents to numerous studio sessions, commercials, and disco tracks by the time of this release – which has the lady stepping into the spotlight as a fully-formed talent in her own right! The vocals are ... LP, Vinyl record album