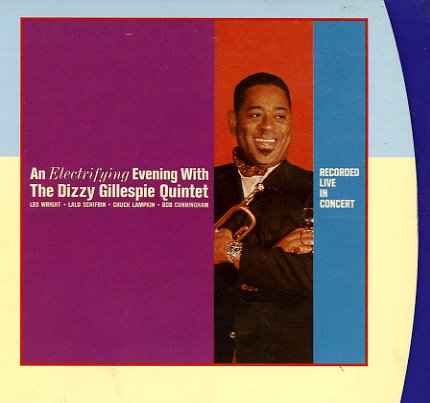 While actually not as electrifying as some of Dizzy's other albums from the time, this one's still pretty darn great, and features his great group with Leo Wright on alto and Lalo Schfrin on piano. The band grooves with a subtly Latinish vibe, and the tracks are nice and long long long. Titles include "Kush", one of Dizzy's best Latin numbers, plus "The Mooch" and "Night In Tunisia". The CD also includes an interview with Dizzy by Charles Schwartz.  © 1996-2023, Dusty Groove, Inc.
(1999 Verve Master Edition.)

Have Trumpet Will Excite
Verve, 1959. Used
CD...$4.99 6.99
Diz breaks past his bop playing, takes a bit of a turn towards swing-based material, and also hits this nice rolling groove that gives a bit of a peek at the way he'd sound in the 60's, when he had Lalo Schifrin on piano, and more of a Latin sound. He's backed here by Junior Mance on piano, Les ... CD

Johnny Hodges With Billy Strayhorn & Orchestra
Verve, 1961. Used
CD...$8.99
Some rare non-Ellington material from Billy Strayhorn and Johnny Hodges – recorded as part of a series done by producer Stanley Dance at the end of the 50s! The feel here is a almost a bit more open and less restrained than the usual Ellington groove – with some standout longer tracks, ... CD

We Don't Die We Multiply
Gitanes/Verve, 1997. Used
CD...$4.99
With Rodney Kendrick on piano, Tarus Mateen on bass, and Turu Alexnder on drums. CD