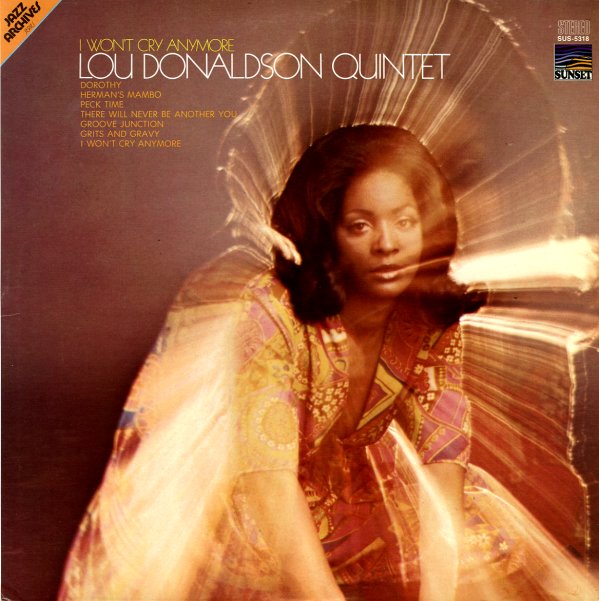 Late 60s repackaging of the Swing & Soul album, a rare one by Lou! Pure genius from Lou Donaldson – proof that his voice on the alto sax was one of the freshest in the post-Charlie Parker years! Lou's blowing here with a lively intensity that's clearly inspired by Parker, but which diverges from it quite a bit – taking a similar blend of inspiration and rediscovery that Jackie McLean was using on his Blue Note sessions of the time, but going in a much more soul-based direction than Jackie ever did. The group on the set's great too – with Donaldson's frequent accompanist Herman Foster on piano, always a treat on any set – plus Peck Morrison on bass, Dave Bailey on drums, and Ray Barretto kicking up a nice little groove on conga! Titles include "Herman's Mambo", "Peck Time", "Groove Junction", and "Grits & Gravy".  © 1996-2022, Dusty Groove, Inc.
(Cover has some general wear and a small stain on the back.)

Collision In Black
Blue Note, 1969. Very Good+
LP...$48.99
An excellent pairing of funk talents – the tight trumpet of Blue Mitchell, and the super-soulful backings of Monk Higgins! Higgins has a groove that was schooled in the funky 45 underground of Chicago – and here, he really finds a great way to pick things up for Mitchell – ... LP, Vinyl record album

Further Explorations
Blue Note, 1958. Near Mint-
LP...$49.99 (CD...$8.99)
One of the most fantastic Horace Silver albums from the 50s – a set of complicated tunes that really lives up to its "further explorations" title! The session's a perfect example of the way that Silver was mixing hard bop sensibilities with more exotic styles of arranging in the ... LP, Vinyl record album