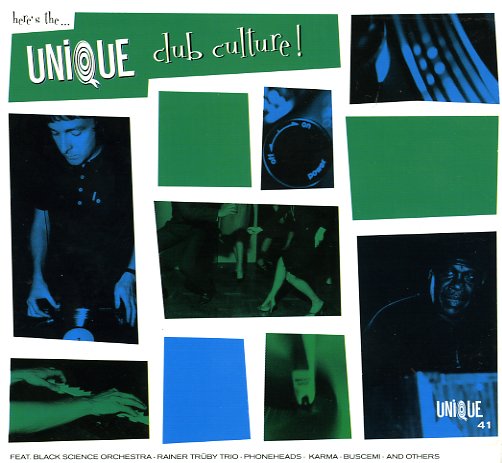 You know the vibe – modern tracks with a retro feel, a bit loungey, a bit Braziliany, and all blended together nicely with a hip package and excellent production. Tracks include "48 H Of Le Mans" by Karma, "The Catwalk" by Frank Popp Ensemble, "Donaueschingen" by Rainer Truby Trio, "La Musica Ayer Con El Sonido De Hoy" by Buscemi, "Latin Racer" by Metrophonics and Mel Collins, "Solex" by Phoneheads, "Out Of Time" by Big Boss Man, and "So Look Who's Cooking" by Malachi Trout. 13 cuts in all – released in conjunction with the Unique Club in Dusseldorf.  © 1996-2021, Dusty Groove, Inc.

45
Unique (Germany), 2003. Used
CD...$6.99
Another fine little batch of groovy Brazilian soul from Eli Goulart! Eli still reminds us a bit of what we love about Jon Lucien – the airy arrangements and light funky style sounds like a summer breeze. It has sweet rolling bass and percussion, crisp horn charts, lovely vocals and punchy ... CD

Songs For You
Unique (Germany), 2002. Used
CD...$4.99
A fantastic bit of keyboard grooving – the third and best album by the Xaver Fischer Trio! The format is very simple – just classic-sounding electric keys, played in tandem with bass and drums, plus some occasional extra touches. The approach is great – kind of like a Ramsey ... CD

Out Of Towner
Unique (Germany), 2005. Used
CD...$2.99
A deeply complicated set of grooves from Ben Human – one that comes across like a classic soundtrack, souped up with some very tasty contemporary touches! There's a vibe here that seems to run from mid 60s French and Italian work to early 80s electronics – all served up with the ear ... CD