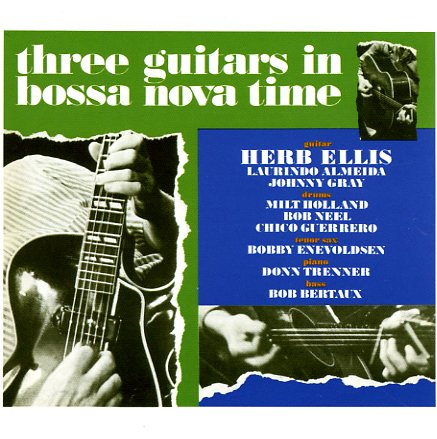 A really really wonderful little record – one that's far more than you might guess from it's slightly gimmicky title! The session's clearly done in a mode to resonate with the Charlie Byrd or Stan Getz bossa work of the early 60s, but it's also got a slightly offbeat quality that makes it really unique – a sound that partly comes from the use of three guitars by three relatively different players, and from the way that the tunes themselves are put together. There's almost a jam session feel at times here – with the guitars coming together in a tension of different voices, hardly the sort of thing you'd hear in a regular bossa album. But equally great is the tenor sax work of Bob Enevoldsen – which comes in with a sharper edge and a bit more soul than his 50s sides – creating a deeper quality to the tunes that's really great. Percussion is by a trio that includes Milt Holland, Bob Neel, and Chico Guerrero – and Donn Trenner plays piano and Bob Bertaux is on bass. Titles include "I Told Ya I Love Ya Now Get Out", "Sweet Dreams", "Bossa Nova #2", "Bossa Nova Samba", and "Leave It To Me".  © 1996-2022, Dusty Groove, Inc.