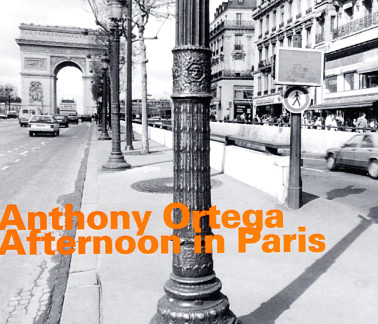 A beautiful illustration of the deep talents of Anthony Ortega – a player who still sounds as creative and inventive this late in his career as he did way back in the 50s and 60s! The bulk of the CD features Ortega in two settings – one, a batch of studio duets with bassist Kash Killion; the other a series of live solo performances, recorded in Paris by a video camera! The Killion duets have a wonderfully warm, round sound – acoustic bass set up next to Ortega's alto and flute, with a carefully structured approach that's extremely thoughtful, and almost poetic. The live solos have a much rougher sound – partly from the starkness of the video recording, but also because they represent Oretga taking it much more off the cuff – just spinning things out on alto sax with a sound that's a fair bit like the old days. And to cap things off – speaking of the old days – the CD closes with one more duet from the 60s – a track that has Ortega and bassist Chuck Domanico playing together from an older Revelation session, appearing here for the first time ever! That track is a long version of "Ornithology", and other titles include "Ask Me Now", "Jupiter", "Blue Monk", "I'll Remember April", "Now's The Time", and "Open Spaces".  © 1996-2021, Dusty Groove, Inc.

Sunrise In Different Dimensions
Hatology (Switzerland), 1980. Used
CD...$16.99
The "Sunrise" in the title here is especially well-placed – because this live performance by Sun Ra has a beautifully glowing quality – one that unfolds musically as the set rolls on, moving through a day's course of music in different moods and dimensions! Ra initiates the ... CD

Excursions
Atlantic/Collectables, 1973. Used 2CD
CD...$9.99
A super-long batch of messed-up funky jazz from Eddie Harris! The record's got Eddie working all aspects of the electric sax – in a similar style to some of his other work on the best Atlantic albums of the 70s (like Instant Death of Plug It In) – and the group features a shifting cast ... CD

Go On (Japanese paper sleeve edition)
Three Blind Mice/Think (Japan), 1972. Used
CD...$29.99
Excellent work from Japanese drummer George Otsuka – a set that has him stepping away from his previous piano trio modes, and really making some greater magic with a larger group! The combo here is a quintet – filled with bright young players that include Shunzo Ono on trumpet and ... CD

Night & Day (Japanese paper sleeve edition)
Three Blind Mice/Think (Japan), 1975. Used
CD...$24.99
A real swinger of a record – one that features vocals and conga work by Koji Moriyama, with backing by the piano trio of Tsuyoshi Yamamoto! Given that Yamamoto's style is usually a bit more spare and laidback, it's nice to hear him grooving in a setting like this – as Moriyama's a ... CD

Barquinho
Sony (Brazil), 1964. Used
CD...$24.99
A classic album by Maysa – one of Brazil's most evocative vocalists of the 60s, recorded here in a lovely session of bossa tunes that begins with her stunning reading of "O Barquinho"! There's a core jazz group backing Maysa up – and strings and larger orchestrations drift ... CD