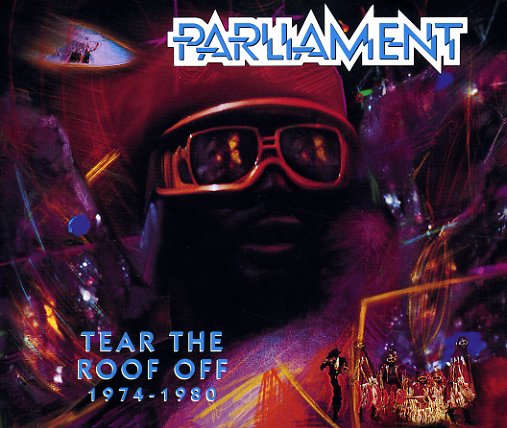 After beginning life as a super fuzzed-out psychasouladelic band, Parliament emerged as one of the best pop-funk combos of the mid/late 70s – with a tight tight sound that mixed the smooth major label sound of Casablanca with the mad funk genius of George Clinton. This huge 3LP set brings together some of the band's best tracks from their glory years of the late 70s – when they were hitting the charts and selling a huge amount of albums to college kids stoned out of their mind waiting for the mothership to land. Tracks include "P-Funk (Wants To Get Funked Up)", "Mothership Connection (Star Child)", "Testify", "Mr. Wiggles", "Bop Gun", "Up For The Down Stroke", "Theme From The Black Hole", "Give Up The Funk (Tear The Roof Off The Sucker)", "Flashlight", "Ride On", "Rumpofsteelskin", "Agony Of Defeet", and "Children Of Production". 25 tracksin all!  © 1996-2021, Dusty Groove, Inc.
(Out of print, BMG music club pressing. Slipcover has some edgewear.)

On The Radio – Greatest Hits Vol 1 & 2
Casablanca, Late 70s. Used
CD...$8.99
Ahh, the dancefloor soul perfection of the beautiful Donna Summer – and classic late 70s production by Giorgio Morodor and Pete Bellotte – songs that are played often, even to this day, but will never be played out! Was this the one that coined the phrase "shipped gold, returned ... CD

Cruisin
Casablanca/Polygram, 1978. Used
CD...$9.99
A real breakout album for The Village People – thanks largely to the hit "YMCA", which had surprising play at the time – and has gone onto become one of those ballpark hits that everyone seems to sing completely un-self-consciously! The group are still working here in a New ... CD