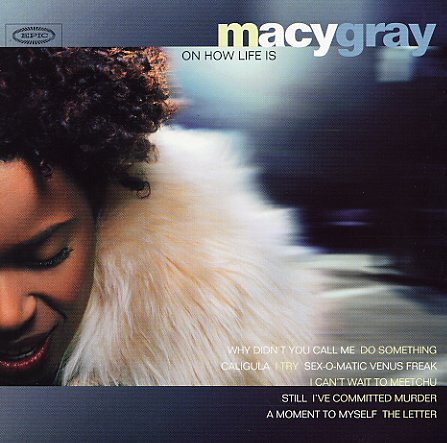 Macy's first album, debuting her raw approach to both singing and lyrical content. With "I've Committed Murder", "Why Didn't You Call Me", "Sex-o-matic Venus Freak", "A Moment To myself", "Do Something" and "The Letter".  © 1996-2021, Dusty Groove, Inc.
(Booklet cover has initials in pen.)

Who Is Jill Scott?
Epic/Hidden Beach, 2000. Used
CD...$4.99
The incredible debut of the mighty Jill Scott – a record that asks and answers a question with the title – then goes on to not only establish Jill as one of the freshest soul music talents of her generation, but also an artist who set the tone for so many others to follow! The record ... CD

Chasing After The Sun/Mysteries Of Life/Inspiration/How Deep Is Your Love
Polygram (Japan), 2000. Used 2 CDs
CD...$5.99
Special limited 2CD version! This sparkling single is one of her best yet – with an extended groove on both sides, and a style of production and songwriting that pushers her deeper and deeper into new territory. "Mysteries Of Life" is an amazing track – one that starts with ... CD

Love X Love – Who Needs Love Remixes
Canyon (Japan), 2002. Used
CD...$18.99
A great album gets even better – as Bluey and crew open the door, and let in a host of great guest talents to remix their impeccable Who Needs Love album! The set's got all the soulful magic of the original – a lasting groove that goes deeper than any of Incognito's recent albums, and ... CD

Deeper
Compendia, 2004. Used
CD...$9.99
Sweet and smooth blue eyed soul from Pete Belasco – recorded with lots of jazzy undertones, and a really warm full sound that's mighty nice! Pete knows very well that less is more, and unlike other singers of his nature who can sometimes push things too much with a fake soul sound, Pete ... CD

There's Nothing Like This
Talkin' Loud (UK), 1991. Used
CD...$8.99
A classic of independent soul, and a record that showed the world that the indie spirt wasn't dead – even in the 90's. Omar put this debut album together himself in his bedroom, recorded the whole thing for under 30,000 pounds, and after a brief run issuing it himself, sold the album to ... CD