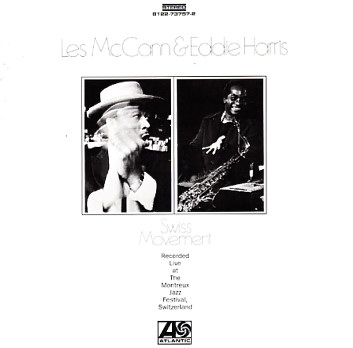 Also available
Les McCann & Eddie Harris — Swiss Movement ... LP 14.99
Les McCann & Eddie Harris — Swiss Movement – Montreux 30th Anniversary Edition (with bonus track) ... CD 8.99
The extremely successful union of two of Atlantic's biggest funky jazz stars, caught live in Switzerland, with the amazing Benny Bailey sitting in on trumpet. The tracks are long and funky, and are virtually a blueprint for pop soul jazz playing of the time – mixing slinky rhythms with some breakout solos that show that all players are still deeply committed to a strong jazz sound. Titles include "Cold Duck Time", "The Generation Gap", "Kathleen's Theme", and their great version of "Compared To What", with the famous vocal by Les that made the track a soul jazz vocal hit!  © 1996-2023, Dusty Groove, Inc.