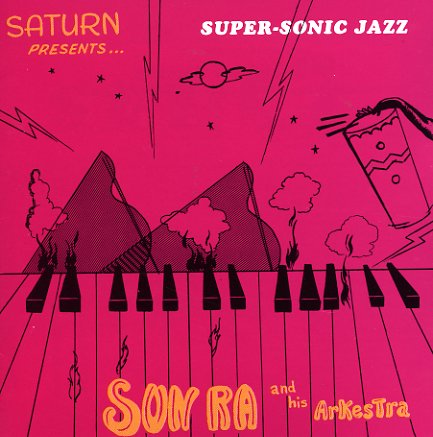 The first album on Saturn! Despite the futurism that the title of the set might imply, the material on this LP is actually some of Sun Ra's earliest, and dates back to the years when the Arkestra was first beginning to make itself heard in Chicago. That doesn't stop the material from being amazing, though, as these prime early tracks really show how strong Ra's vision was, even when it was being applied to material that might look more simple on the surface. Titles include "El Is A Sound Of Joy", "Medicine For A Nightmare", "Sunology", "Advice To Medics", and "Portrait Of The Living Sky".  © 1996-2020, Dusty Groove, Inc.

Nothing Is
ESP/ZYX (Germany), 1966. Used
CD...$9.99
One of the best non-Saturn Sun Ra albums of the 60s – material recorded live on a tour of New York colleges in 1966, and very much in a spirit that captures the Arkestra at their best! Longer tracks are juxtaposed nicely with shorter ones – in a way that has the group running very ... CD

Sun Ra Arkestra Live From Soundscape
DIW (Japan), 1979. Used 2 CDs
CD...$26.99
Excellent live work from one of Sun Ra's greatest periods – recorded in New York in 1979, and done with a fragile quality that makes the record one of the Arkestra's most beautiful from the time! There's a warmly soulful spirit to nearly every tune on the set – a post "Space Is ... CD

Cosmo Sun Connection
ReR, 1984. Used
CD...$9.99
One of the more obscure Sun Ra albums of the 80s – a set that was initially pressed up by Recommended in a very small amount on vinyl, but easily one of the more compelling Arkestra sets from the time! Given that other 80s efforts often show the Arkestra moving towards a tighter, more ... CD