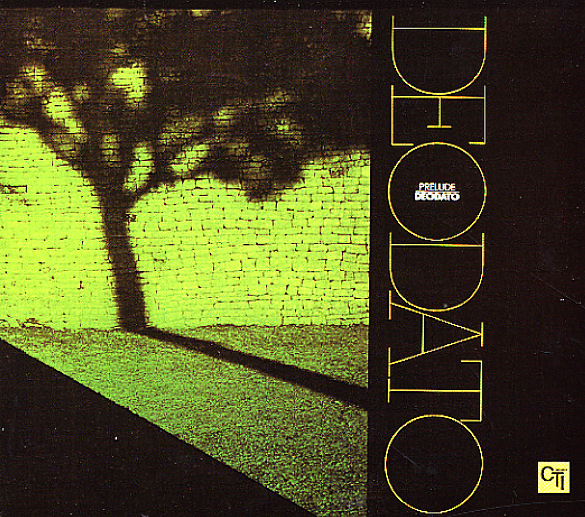 Also available
Deodato — Prelude ... CD 5.99
A legendary album from the 70s funk scene – and one of the crowning achievements of keyboard maestro Eumir Deodato! Deodato got his start during the bossa years of the 60s – where his sophisticated charts were already enough to make his career a landmark – but in the following decade he picked up the Fender Rhodes, and really took off in a great new direction with classic records like this! The set's a wonderful blend of larger charts and jazzy soloing – with sublime Rhodes lines from the leader, plus a mix of acoustic and electric instrumentation in the best CTI mode – underscored by percussion from both Ray Barretto and Airto. The features Deodato's remake of "Also Sprach Zarathustra" into the funky "2001" – soaring with Fender Rhodes lines that set a new standard for the instrument, with a funky undercurrent that few would have expected for the tune. Other tracks are nice too – and include a great bossa-y version of "Baubles Bangles & Beads", plus "Spirit Of Summer", "September 13", and "Carly & Carole".  © 1996-2023, Dusty Groove, Inc.
(CBS pressing with some light staining on the traycard artwork.)

Sky Dive
CTI, 1972. Used
CD...$9.99
A killer set from Freddie Hubbard's legendary years on CTI! Like the classic Red Clay album, there's 4 tunes here, all longer cuts – where everyone gets a chance to stretch out a bit, over smooth (but not too smooth!) electric grooves, supported by great orchestrations from Don Sebesky! Ron ... CD

Sugar (with bonus track)
CTI, 1970. Used
CD...$4.99
A bit hit for Stanley Turrentine – and a pretty darn nice record of extended groovers, with a harder sound than you might expect from the tongue-licking cover, and a title of Sugar! The record's only got three cuts – one of them Stanley's famous version of "Sugar", the other ... CD

God Bless The Child (with bonus tracks)
CTI/CBS, 1971. Used
CD...$8.99
A stone classic from Kenny Burrell – a record that brought the guitarist to a whole new audience, with a wonderful sound that's a perfect summation of CTI at its best! The vibe here is perfect – spare, airy guitar lines from Burrell – playing with a freer style than usual, ... CD

Wildflower
CTI/Epic, 1973. Used
CD...$6.99 (LP...$16.99)
A sweet bit of electric funk, and one of Hank Crawford's greatest records from the 70s – thanks in large part to the great Bob James – who arranged and produced the record with a mighty soulful vibe – leaving Hank lots of room to solo on his own over the top! The groove is really ... CD

Shape Of Things To Come
CTI/A&M, 1968. Used
CD...$6.99
Excellent funky George Benson – mellow grooving, never too over the top, but with a fantastic mellow groove that really points the way ahead to the CTI sound of the 70s! We'd dare say that this is Benson's best from the early solo years of the late 60s – and the record's got a groove ... CD

White Rabbit
CTI, 1971. Used
CD...$9.99
One of the moodiest sessions on CTI from the early days – and a landmark album that took George Benson from the funky jazz scene into the upper reaches of 70s jazz. The record was put together by Don Sebesky, and it's a lot more high concept than some of George's earlier work – and ... CD